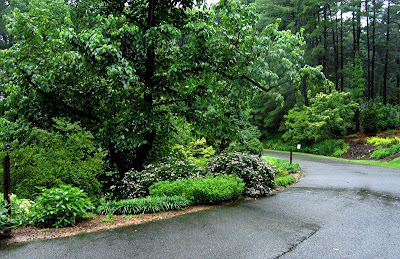 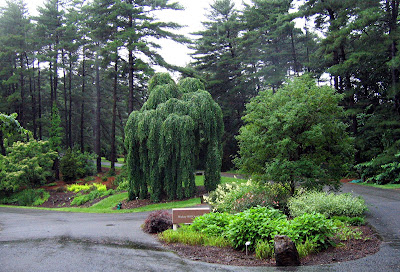 It has been raining forever, or at least it seems that way. Most of the plants are loving it. I think the staff is split with most of us grateful that the water table is fully charged and we haven't had to water yet. Weed growth has surely been stimulated and accelerated and there have been washouts, but the weeds can be dealt with as can the washouts.

These are pictures of the front of the Asian Collections at the USNA. We called that small island bed in the lower picture the "Korean Triangle" in the early 90s. Now it's KO. I remember, oddly, a number of plants that were there: Patrinia, Peucedanum, Lychnis cognata, Vitex rotundifolia, and Mugwort. Lots of Mugwort. I spent a good deal of time digging and poisoning Mugwort. The plants are more interesting now and the design....well, this bed is well laid out and there wasn't really a design before.

PS Though my eyesight is not good, I am aware of the problem in the second photo; my camera, a Canon Power Shot A95 has served me long and well, three plus years by my count. Spending every day in my pocket must have been a tough experience and it is time to replace her. Actually her viewing screen died a week ago. It is a sad time, but we will soldier on.
Posted by ChrisU at 5:29 PM 0 comments

Jasminum officinalis 'Fiona Sunrise'...I post this in honor of the return of "Burn Notice" on USA 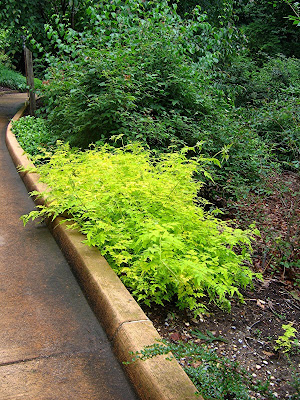 Television.....aggghhhh....I have no pride. I watch this show though.

The plant is another golden accent in China Valley. Thank you Stephan. The photograph doesn't do justice to the color. I like it.
Posted by ChrisU at 1:59 PM 0 comments

First real (non-test) plants go into the new greenhouse at the National Arboretum...well, maybe they're kind of test plants 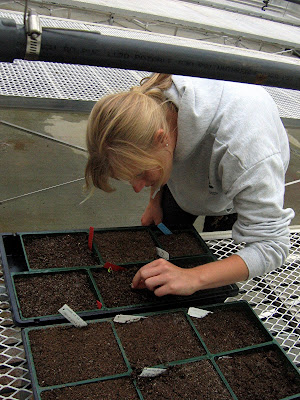 But we do care about them! Amanda and I moved three flats of seedlings from Chris Carley's NACPEC collecting trip into Propagation Room 2. Mist will run intermittently during the day. The seeds come from cold-stratification in our new cooler! Wow, look at us! One of the seed trays (actually the one Amanda is adjusting) is Acer henryi, a very nice fast-growing tree with white bark that has interesting flowers and beautiful seeds in pendant racemes.
Posted by ChrisU at 1:52 PM 0 comments

Amanda, Nathan, and I worked in the central valley Wednesday 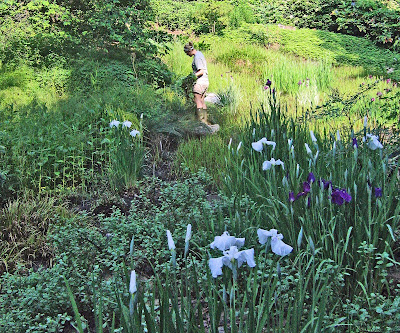 We weeded and pruned yesterday. The irises are mostly Iris ensata, the Japanese Iris. Both this, the central valley, and China Valley, one ravine to the south, have extensive areas that stay consistently wet. That's what these Iris like, we have a lot of them and they're at their height right now.
Posted by ChrisU at 2:43 AM 0 comments 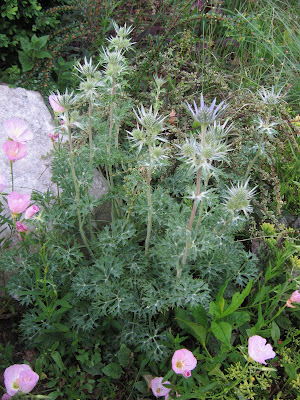 This is my favorite Eryngium. Its smallish and subtle?? go figure. I guess I like it because it's not like me. It has lived untended at the corner of this quartz boulder for upwards of 15 years. The flowers aren't the bluest that the genus has to offer, but the nice mounded form of the plant and the perfectly variegated leaves make it special. I've never divided it. Occasionally I cut the variegated Cotoneaster out of it and sometimes I pull out Oenothera speciosa, but otherwise its care free.
Posted by ChrisU at 4:21 PM 0 comments 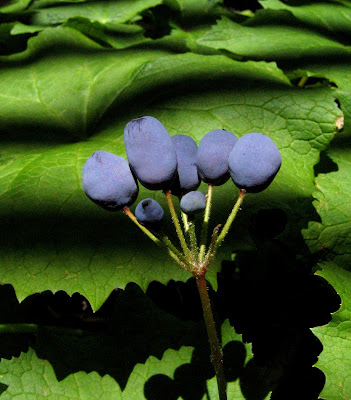 You have to love the Berberidaceae; for reasons of phytochemistry, deer rarely eat any of these plants. Disease is not normally an issue, most tolerate, or require some shade. Many have good berries which can be a blessing and a curse. They're pretty but birds eat the fruits, notably of the commoner Barberries, run them through their digestive system, and deposit them, primed to germinate, randomly throughout their territories. Barberries are an invasive problem in some places. So far as I know, this plant is not.

This Asian species is a counterpart to our native Diphylleia cymosa, Umbrella-leaf. Both have these, well umbrella leaves and blue fruit. Both are shade plants. I don't know this one yet, but our native likes the water a bit for a shade plant and I suspect the same is true of this species. Anyway it has large boldly-textured leaves, and I can't get enough of them!
Posted by ChrisU at 4:32 PM 2 comments

Rhus coriaria golden form from Azerbaijan...one of the interesting plants from Stefan and Martin's trip 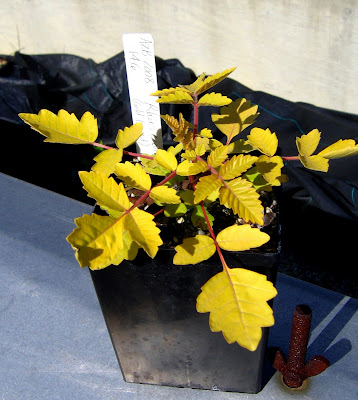 The Azerbaijani plants are growing and they are being assigned to various collections for planting out. Herb Garden, Intro Garden, and us, the Asian Collections. I am still excited about these plants and this is one of the most exciting. Rhus typhina 'Tiger's Eye' is a golden Sumac that had everyone talking when it came out 5? years ago. This is another golden Sumac with red petioles and twigs. Maybe we're showing favoritism but it seems like this unnamed seedling has a bit richer color, more towards gold less towards yellow. Theoretically this plant is smaller than Rhus typhina so that might be good. Historically the shoots and bark have been used for tanning leather and the fruits as a condiment for seasoning meat. Apparently both Martin and Stefan enjoyed the latter use!

I am not a person to shy away from the less subtle effects in a garden and was happy to see a half a dozen? 'Tiger Eye' Sumacs in one of our greenhouses waiting for Brad to plant them out. We put one in my sister Val's garden and they're loving it!
Posted by ChrisU at 3:56 PM 0 comments

Penstemon digitalis: a frontier colony in the Fern Valley Meadow 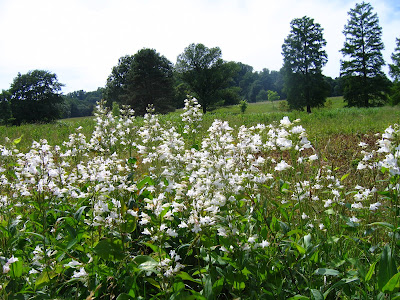 I first met this plant through its cultivar 'Husker Red' in the early 90's. I was doing design/install and came across a dozen plants at Shemin's Nursery in Burtonsville. It was winter and their defining characteristic, a bright red winter rosette, was on brilliant display. I bought all the plants, sold half of them to the job I was on, kept one, and gave the rest away. I remember dropping by Hank Doong and Sue Bentz's house and sticking one into a perennial planting in their back yard. Despite lacking the bright red rosette, the straight species is still a great plant; look at those flowers!

Fern Valley has hundreds and hundreds of P. digitalis that wander about spreading slowly by seed. I love the flowers but apparently not everyone does. I have seen references to removing the flowers! so the plant has more energy to produce leaves??!!?? Don't do it. For one thing, this is one of those plants that is occasionally negatively affected by the premature removal of flowering spikes. For another, the flowers are lovely!
Posted by ChrisU at 2:52 PM 0 comments

Magnolia macrophylla: flower is 21" from tip to tip without pressing it! 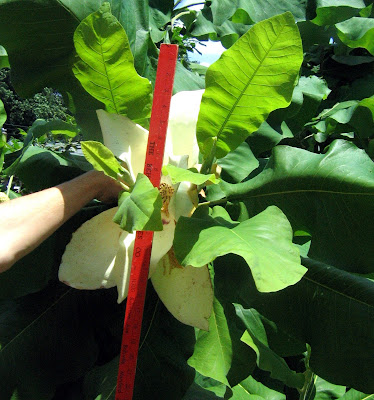 For the last few weeks I've been watching these flowers open on the tree beside our side deck. Today I was finally motivated to measure them. They seemed larger than usual. I convinced Peter to pull a branch over to the railing and we used a yardstick.

According to Dirr's Manual, Magnolia macrophylla flowers range in size from 8-10" occasionally reaching 14" across. The camera is not perpendicular to the yardstick, but I was there and that flower measured more than 20" across. I expect that the cells in flowers, like those in leaves can, expand to larger or smaller sizes depending on the amount of water available s when they are maturing. We have had plenty of rain this spring!
Posted by ChrisU at 12:41 PM 0 comments

Saturday I took possession of my ten pound two volume "Natural History of Plants..." 1894 by von Marilaun translated from the German 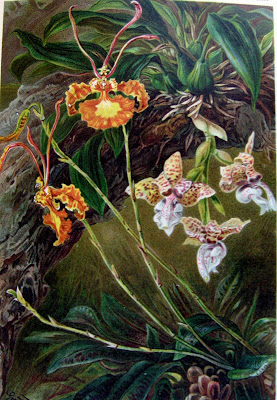 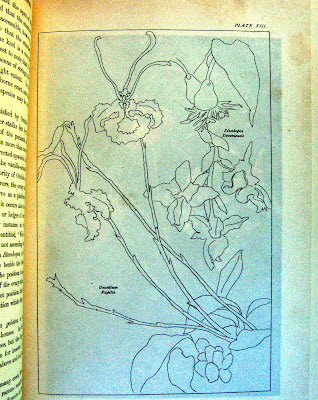 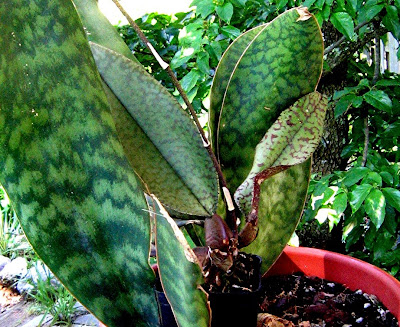 I bought these books at the Arboretum used book sale earlier this year without removing the bands that bound them together. They cost a bit of money so I put them away to be a birthday present! Well, yesterday it was time and I eagerly opened them. I wasn't disappointed. Basically, in about 1600 pages, Anton Kerner von Marilaun attempted to summarize the science of Botany as it stood in 1890. I'm thinking he did pretty well! They are interesting volumes with an abundance of high quality woodcuts and 16 color plates. Its great to find the plates intact as there is a worldwide problem involving razor blades, rare-book rooms, theft, and the sale of matted framed antique prints. Anyway. The top photograph is, obviously, the plate; the second picture is a transparent overlay that identifies the plants in the color plate.

Because I have such an ungodly number of plants, I guess it's not a great coincidence that one of the plants in one of the 16 color plates would be a plant on our orchid shelves, but...that's not the extent of the coincidence. Yesterday, an hour before I opened the books for the first time, I moved the Psycopsis/Oncidium papilio out into more light. I had pretty much ignored that plant for the last most or so. You can see the flowering stem in the picture, but you can't see that it's more than two feet long! The flowers, that still pop out about every month or so are quite large and I worried about wind blowing the plant over. It occurred to me to wedge it into this Sansevierea grandis for stability. It worked fine, and coincidentally enough, both have the same thick stiff leaves with the same (unusual) variegation.
Posted by ChrisU at 7:21 AM 0 comments

All the rain and the insane humidity aren't great for Pelargoniums, but they're hanging in there! 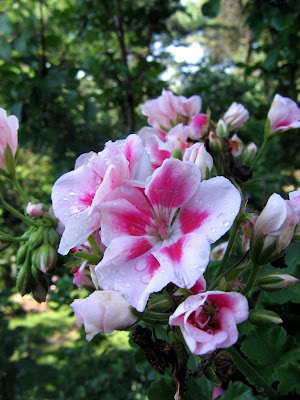