We swaddle the newly constructed Wet Meadow in Coir 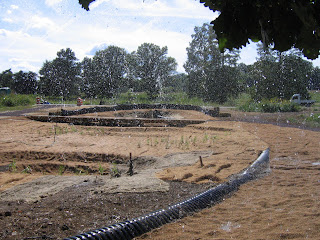 It was a long week in Fern Valley. The contractors are essentially finished working in the Prairie Meadow area. They left us quite a large area of bare soil that we addressed as soon as they left. We seeded the entire area with oats for cover and overseeded the low areas with a wetland mix. Species in the mix include: Swamp Sunflower, Swamp Milkweed, Sensitive Fern, Mallow, Bushy Seedbox, Sneezeweed, and half a dozen others. The upper basin, visible in the background, actually had a bit of water in it complete with a frog and tadpoles.

We used a different mix on the areas at the top that will stay drier. As we sowed the seeds we laid the coir matting. Coir is coconut fiber, I had never used it before, but I like it. It has far more structural integrity than jute, though it is less flexible.Then we watered; we are getting good at watering seeds as we have been watering seeded edges to both the Flowering Tree Walk and its extension in the Fern Valley Meadow.

The fun part was planting plugs of sedges, and small plants of Verbena hastata, Blue Vervain. The Verbena was grown from seed that we collected in Pennsylvania two years ago. It was flowering so if all goes well it will seed throughout the basin later this year. We have three flats of Rice Cutgrass to plant next week and more oats to plant along the regraded margins of the new trail. Its all going to be great next year!
Posted by ChrisU at 6:31 PM 0 comments 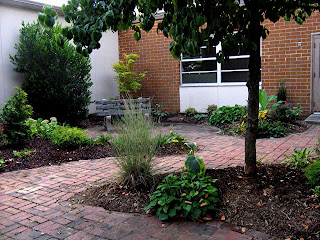 It hasn't rained in the month that I have been volunteering in this courtyard at the Beltsville Library so that much of my time has been spent watering. Most of the rest has been spent removing large plants, transplanting, and planting; I had visualized a calmer more Zenlike experience. Methodically weeding from one end to the other, of course all small weeds, and strolling through with a hose, occasionally supplementing Natures bounteous rainfall and snipping the odd stray branch. No, the reality is lots more frantic and laborious. But it's still good. Rain will come someday. and I'm finished with big plants!

This week, with my son Pete's help (actually, I helped him), I removed an overgrown Japanese Holly from the back left corner. It was disfigured by a number of dead and dying branches, the result of the gradual spread of stem canker. This is purportedly a disease that is only an issue in stressed plants but it is so widespread I rarely use this plant anymore. Anyway, I replaced it with Acer palmatum 'Sango Kaku', the Coral-barked Japanese Maple. The bright pink/coral branches will certainly be an accent in the winter and the chartreuse foliage is attractive in season. I have a native tree, Sapindus drummondii, to balance it on the side out of the picture! I find I am using more non-natives than I had hoped, but still planted Tiarella, Phlox, Sedum and Rudbeckia.

Next week I do want to add some Lady Ferns, Athyrium felix-femina, and red leafed Ninebark, Physocarpus opulifolius 'Diablo'. The Lady Ferns will go under the Birch, not visible in this picture, I hope a nice textural addition. The Ninebarks will go between the path and the wall. They are vertical, more or less, and interesting; the leaf color, the exfoliating bark, the flowers, and the long lasting fruit. I'll dig some reblooming iris from home and put in a few varieties. As a series of individual plants they become become min-textural/architectural accents and the flowers...everybody loves. The garden gets better a little at a time.
Posted by ChrisU at 6:10 PM 0 comments

When the provenance of a plant comes under discussion, it is usually part of an attempt to decide if that particular plant will be suitable for a particular location. For example, while many species are hardy in USDA Zones, say 6-9, a plant that came from Central Florida (Zone 9) may not be hardy in Central Pennsylvania. But it might. But it might not. Anyway there's another sense of the word. When antique dealer's use the word, they are referring to the personal ownership history of an item. I like knowing where my plants came from. Sitting here looking out the window into the back garden, I can see an old Sky Pencil Japanese Holly that was given to me in 1992 by Gene Eisenbeiss. Gene was a horticulturist at the National Arboretum for over 25 years. He was the international registrar for cultivated Hollies for I don't know how long with a long list of publications. He was an incredible resource for information, much of it about hollies, and an incredibly pleasant person. I like having that plant.

If the banana weren't in the way I could see a potted gardenia standard that I have had for...I guess about 25 years. It was a gift from a customer at Behnke's when I worked there in the early 1980's. She had to get rid of it because her son was allergic to many chemicals and Gardenias are hard to maintain without using pesticides. Over the years its trunk diameter has gone from about 3/4" to 4". Ironically, I haven't used any chemicals on it in years. It lives in our semi-heated basement all winter and somehow stays clean!

Sometimes its fun just to remember where you bought a plant a long time ago. The 30' Parrotia I see through the front door came, as a ~18" one-gallon potted specimen from Susannah Farms Nursery in Poolesville about 20 years ago. I bought it on the first trip I made there along with a dwarf cultivar of Pinus strobus (I have lost the name) that is still less than 3' tall, and a fastigiate Taxus 'Beanpole'. Memory Lane.

But while 20 odd years may be impressive to younger folks, I still have a few succulents that date back to my first infatuation with them in the late 1960's; that means 40 year old houseplants. Wow. I must be old.
Posted by ChrisU at 2:36 AM 0 comments

This picture is apropos of nothing...Just a house redone by HGTV's Curb Appeal 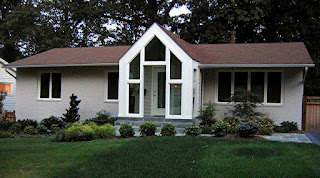 Actually it was two doors down from a consultation this week. The homeowners wanted help with an evergreen screen under deciduous trees. Boy that's one I've heard a lot. And there aren't that many choices. I'll go over them.

For tall (over 20') plants American Holly is the best, and a wonderful, choice. Unfortunately it is slow. Nellie Steven's Holly is a fast grower and prefers a sunny exposure, but will be okay in bright shade with a little sun. Japanese Cryptomeria also works well in bright shade, better with a little sun. It is fast growing. Use the cultivar 'Yoshino' as most others brown in the winter. Hemlocks used to be good so long as you had adequate moisture, but between adelgids, scale, and mites they are now a high maintenance plant.

Some large shrubs may be useful if the problem is not 2-story or higher. Camellias are great but, like the American Holly, so slow that they require time and patience. Mahonia japonica/bealii is a fun plant with yellow flowers in late winter followed by blue berries. A member of the Berberidaceae it is chemically deer proof and gets some nice red winter color. Agarista is a southern native hardy to USDA Zone 7. It is wide spreading and occasionally susceptible to winter burn but an attractive plant. Two useful if not beautiful or exciting plants are Manhattan Euonymous and Evergreen Privet, the latter a plant that probably ought never be planted again. It is invasive throughout the South. Viburnum rhytidophylliodes 'Allegheny' is fairly fast with interesting leaves but it is often not "opaque."

Three of these plants; Nellie Stevens Holly, Manhattan Euonymus, and the Evergreen Privet, can be pushed into extra growth by ensuring adequate water all summer and doing one or two extra fertilizations during the growing season. Don't try this with the other plants.
Posted by ChrisU at 5:53 PM 0 comments 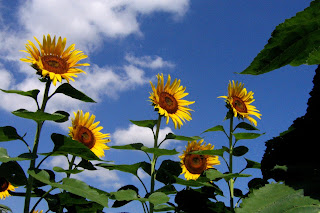 The Washington Youth Garden is just across the road from Fern Valley so there's no excuse for my visiting it as infrequently as I do. The garden and the staff are unfailingly cheery and you can grab a cherry tomato or two for refreshment. Funded and staffed by the Friends of the National Arboretum, the Youth Garden is an outreach program, primarily, but not exclusively, aimed at children. They teach fundamentals of gardening, environmental science, nutrition, and healthy living to hundreds, thousands?, of area students. They have a large and diverse food garden, interesting ornamental plantings, and a spectacular butterfly garden. It is another great place to go in the summer at the Arboretum. I have been driving by these sunflowers for weeks; they finally lured me in!

When the boys were young we often grew sunflowers. I guess lots of families do. It's pretty impressive what a tiny handful of seeds, a bit of water (though they aren't too demanding), and a few months can produce! And they're so cheerful! The species has been cultivated for more than 2 millennia making it difficult to establish its point of origin, but it is definitely a North American native, probably from the SW somewhere. There are hundred of cultivars; the plant became almost faddish ten years or so ago and you still often see the more interesting cultivars here and there in public and private gardens.
Posted by ChrisU at 3:21 PM 0 comments