There's always an embarassment of riches indoors this time of year....but we want spring outdoors now! 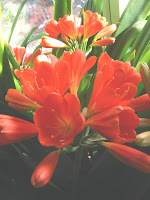 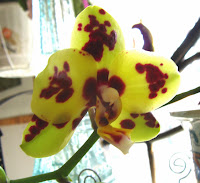 Phalaenopsis, Clivia, forced Hyacinths, Paperwhite Narcissus...even the tropical Hibiscus in the south window is squeezing out a few flowers. Species orchids, the big Adenium obesum, overwintering Geraniums....they're all flowering now. If all this floral largess could only have come a month ago. I want spring outside now. Still, in the face of this recent cold spell, its good to have the tropicals flowering.

The curious giraffe type Phalaenopsis came from Parkside Orchids at the Philadelphia Flower Show a few years ago. I bought it as a seedling sans flowers or buds and it finally flowered last year. Now there is a flood of "blotchy" Phaels. I like the white ones with huge purple spots but will probably not indulge.

It is interesting how orchids appear in the marketplace. There is sort of a background "white noise" of regular cultivars that evolves as the years pass, with new ones coming and old ones slipping away. But there's another phenomena that overlays this and provides a constant flow of interesting new cultivars. Somebody decides to grow an entirely different species that isn't really in cultivation, or a unique cultivar that hasn't been around for a while; they grow a number of flasks. The flasks mature, the seedlings are distributed, and for a while you see the new plant everywhere. They have the cachet of unfamiliarity, and enter the mainstream sometimes for a few years, sometimes for longer depending on their virtues and our tastes. Then someone offers us a different choice and we usually jump at it. We are a fickle bunch.
Posted by ChrisU at 12:52 PM 0 comments

Lonicera fragrantissima....and it is very fragrant 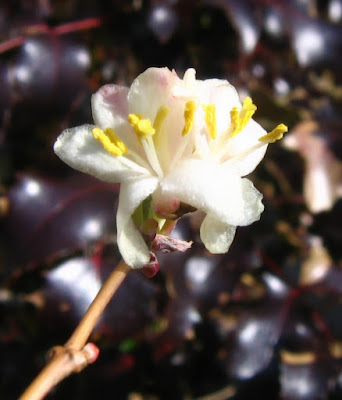 This is a big picture of a little flower. When you put a sufficient number of them together (like a plantful), you magnify a magnificent fragrance enough to perfume an entire garden. And if you tell me it smells like Fruit-Loops, I won't smack you because I'm past all that, but you're wrong. And you're being gratuitously insulting; this plant evolved millenia before Fruit-Loops were invented so, if anything, Fruit-Loops smells like Fragrant Honeysuckle.

The shrub itself is fairly unimpressive in appearance; actually it's ugly. It takes the same form as the other bush honeysuckles that are dangerously invasive. Karen, my wife, has discovered an interesting way of keeping this plant in bounds; she has turned it into a standard. I wouldn't have though it possible, after all, left to its own devices, it becomes a very large arching, mushroom-shaped monstrosity. We have been able to keep ours to a single stem for at least 10 years. I prune masses of suckers from its base and branches from farther up every year so it doesn't become top-heavy enough to uproot itself, and so far it has worked. It's worth the effort becase the fragrance is....well, it's nice.

Every year is different, but in the chronology of winter-flowering fragrant shrubs, this normally fits in between Prunus mume (yes, technically a small tree) and the early fragrant Viburnums. Since it is basically a big weedy shrub, with a heavenly fragrance, I often put it in large scale designs; it's almost an automatic for Schools or Churches. I am not sure its fragrance is as nice as its vining cousin, Japanese Honeysuckle, but since it doesn't seem to seed, it is unquestionably the surest and the best fragrance for your dollar!
Posted by ChrisU at 10:03 AM 0 comments

Fern Valley: the railings are here, the end is in sight 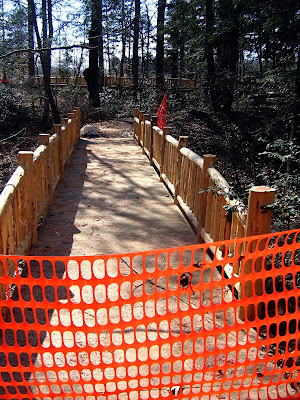 The railings are going in now, so we can walk across the bridges without worrying about falling off! They will be the final phase in more than a year of construction. The new tool shed still has to be installed, and there is still a punch list of details to be attended to before the Collection can be reopened but all the major work has been done. Installing the tool shed is a relatively non-invasive procedure, should only take a week or two, and won't require closing the entire Collection.

David Robinson designed the railings and is personally involving himself in their installation. He is a craftsman, artist, and the founder of Natural Edge, a company that specializes in the design, construction, and installation of rustic structures and furniture for gardens and public institutions. It's worth taking a minute to look at the project photographs on his website. All the designs are customized for the individual sites and they use long lasting woods without preservatives. The railings in Fern Valley are Eastern Red Cedar, and will have Osage Orange detailing. All of Fern Valley has been closed for the last phase of trail-building, but it begins to look like it will be open for Spring. That's a good thing.
Posted by ChrisU at 3:43 PM 0 comments 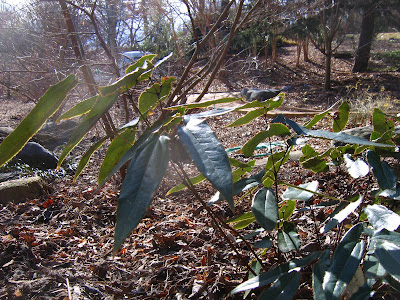 Many of us have lusted after the delights promised by Chen Yi. I would be lying if I claimed that I had never indulged, but I must have been there on the wrong nights because I was never offered Epimedium latisepalum. Apparently she has been around for a while and the idea that our paths never crossed is incomprehensible. The form and grace of this plant are unmatched by any plant I have ever seen. And I have spent my life looking.

The leaves are similar to those of other large-leafed Epimediums but somehow different; they're a little bit larger, a good bit thicker, maybe a little darker green, and the form, did I mention it?, is perfect. I have one in a bud vase and I could just sit here and look at it....but then I wouldn't finish writing this. Not only are the individual stems perfect, the plants, with stems spaced and arranged to maximize exposure to light, are three-dimensional sculptures. This plant could be the basis for the entire Eastern aesthetic.

I don't know what the flowers look like and I don't care; it doesn't matter. Research tells me that they are yellow and large but this plant isn't about flowers. It has been some time since I have met a plant I really had to have, but I found it at Lazy S'S Farm Nursery and it will be mine.
Posted by ChrisU at 2:26 PM 0 comments 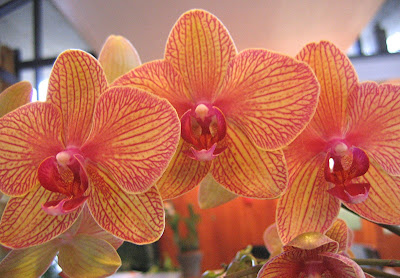 Between the snow, the sleet, and the rain, Wednesday was just a dreary gray day. It wasn't cold really. I think the temperature got up to 45F. It was a damp 45 though and there was a heavy overcast all day. Cheery flowers do populate the lobby though. Hippeastrum continue to produce huge flowers along with a handful of large-flowered Phalaenopsis, a Begonia, and this and that. Enough to fend off the gloom outside.

It's not a fun thing, going from 70 back to 45 degrees. Bulbs are still nosing their way out of the ground and late-winter flowering trees and shrubs continue, but cold, gray, and wet can put a damper on the spirits. The sun is supposed to come out tomorrow and this Saturday we will pass 11 hours of daylight so we're still headed in the right direction.

Meanwhile, seeds from our various collecting trips continue to germinate. The first Magnolia macrophylls seedling is up from the Fern Valley Alabama trip. Also the "unknown vine" that I insisted on collecting, is coming up in numbers. We will no doubt, be able to identify it in a couple of years when it flowers. Stefan has already selected a "golden" form of one of the Chinese shrubby ashes and potted it separately. Another few weeks and we'll be pulling flats out of cold stratification. Time is flying.
Posted by ChrisU at 4:26 PM 0 comments

Nassella tenuissima: horticulture at the Hirshhorn 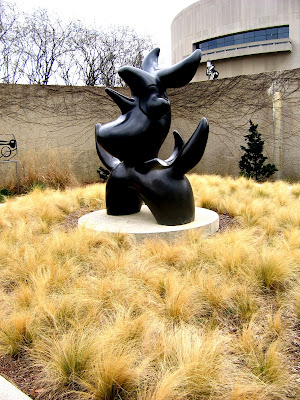 Nassella (Stipa) tenuissima is a great choice for this circular bed surrounding Joan Miró's Moonbird. The Sculpture Garden of the Hirshhorn Museum has undergone several redesigns since it first opened in 1974. I remember them only vaguely, but I do like the plantings now. Some are sculptural themselves, dwarf pines and Hinoki Cypress cultivars. Others, like the grass in this picture, one of my favorites, provide context without intruding. Distinctively textural, it moves horizontally without distracting or detracting in any way from the sculpture. This piece, Moonbird, when I have seen it other places on paving in a cityscape has always felt oddly out of place. Of course that may be the point of the sculpture!

Mexican Feather Grass is one of those plants that, once you see it, you have to have it. At least it is for a lot of people. Native to, surprise, Mexico and the SW United States, it prefers well-drained soil and handles drought with no problems at all. I have grown it in full sun next to the street for at least 10 years though we must be near the northern limit of its range. One plant, isolated enough to show its form, is a sculpture unto itself. I think I have heard it called Horsetail grass, and it does resemble a horse's tail. The blades are very fine and the slightest breeze is enough to shift the plant. It doesn't qualify as even a "near native", but I grow it anyway. The literature suggests that it can reseed enough to become weedy; my plant has never seeded, but perhaps that would require water. If you plant it, and it does begin to seed around, just remove the seed heads before they ripen. They aren't really a visual asset so there's no harm and unless you have a large planting it is doable.

Despite its widespread appeal, local garden centers don't stock it in any quantity. They seem to have 20 or 30 pots a year. You have to get lucky to find it before it's sold out. Because it moves so quickly in a retail environment, it has caught the attention of the big Box Stores and they seem to be contracting it in quantity. I noticed a entire cartfull at my local (White Oak) Home Depot last year, but it goes just as quickly there; it was gone in a few days! There's always on-lin, where it's widely stocked.
Posted by ChrisU at 5:23 AM 0 comments