Max and Peter (left to right) went above and beyond today, erecting this sturdy grape arbor for me 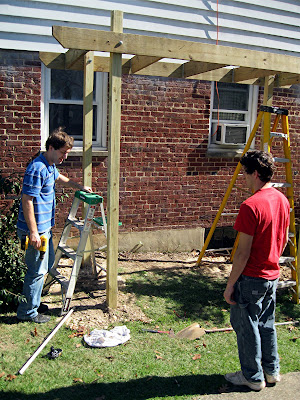 Okay, I bought a 1 gallon grape in Florida the last time we were there, that was August. It's a self fertile selection of muscadine, Vitis rotundifolia. Karen's favorite vineyard/winery in Florida grows hundreds of acres of muscadines from which they make a few varieties of sweet by pleasant wine. Muscadines grow wild everywhere in central Florida. If you had better eyes than I, you'd see them climbing and clambering through trees and undergrowth along every road. Since I have only my vision, I either have to approach my closely, or wait for fall/winter when the strings of yellow-gold leaves twining about clearly identify the vines.

The small round leaves are so distinctive that I was surprised on encountering muscadine cultivars for sale in nurseries by leaves of the more classic shape. Apparently hybridization has gone on along with selection. I chose the cultivar 'Triumph' because it is a good eating grape, because it has leaves typical of the species, and because it is self fertile, not typically the case with the species. At any rate, I can plant it this afternoon and stop feeling guilty about letting it languish in a corner of the front deck. I see its grown shoots almost 6 feet long since August.

Stefan told me that they can fruit the second year from seed so I ought to get something next. year. Actually he was, as always, a fountain of information. Apparently all of the self fertile muscadines are derived from one plant.
Posted by ChrisU at 11:16 AM 2 comments 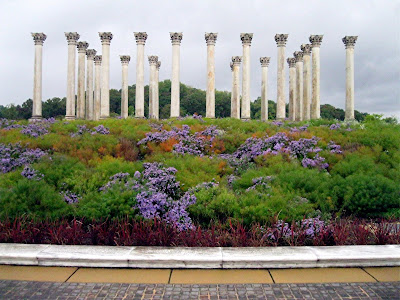 Relatively speaking, at least they were new last fall. Mary Pat says its a "perfect planting". It should be; a lot of people have been working on it for a long time! There are only three different plants in the entire bed, excluding the row of Itea at the front: the asters, Amsonia hubrechtii, and Little bluestem. When the planting was first planted, it included an annual grass Melinus nerviglumis 'Pink Crystals', but now there are just the three native perennials.
Posted by ChrisU at 4:01 PM 1 comments

Tree boxes on the east terrace of the USNA Administration Building 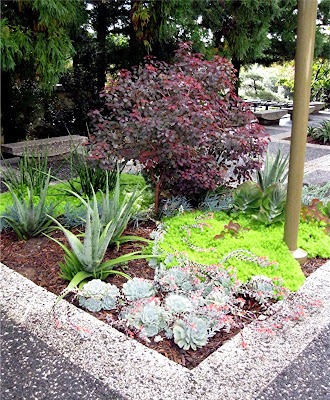 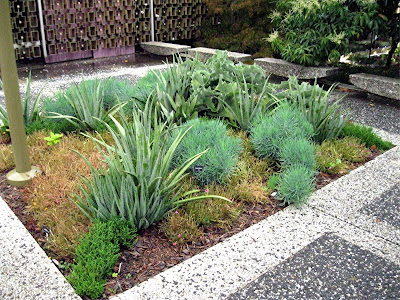 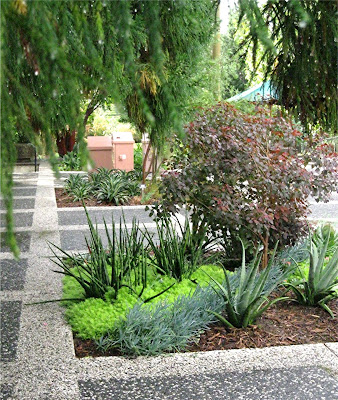 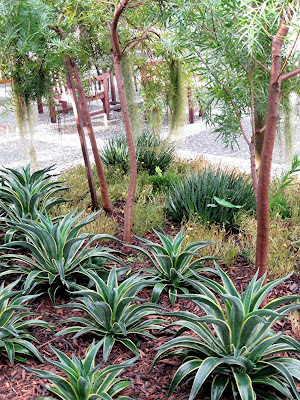 As usual I love these containers. Brad changes them up every year and every year they're more spectacular than the year before....and more xeric. I have always loved succulents so it is a joy to see them displayed so well.
Posted by ChrisU at 3:56 PM 2 comments 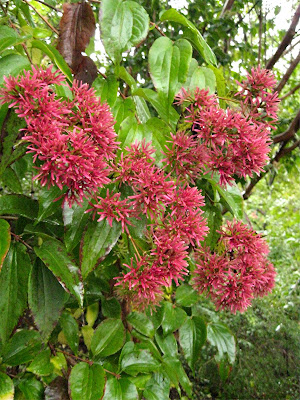 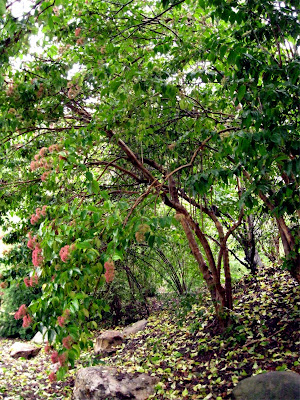 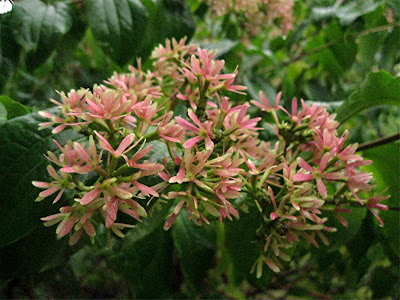 These are appealing, if rather large, members of the Caprifoliaceae. They're relatively fast growing, becoming large upright vase shaped shrubs over a period of ten years. White flowers in late summer are occasionally sweetly floral scented. Chalky pale canes produce tannish peeling exfoliations of bark, but the real show is provided by the deeply colored bracts. Unfortunately, some years squirrels eat them as fast as they color up.

The big plants in the middle of China Valley were planted when I got there in 1991, I planted the,, also big, plants at the bottom of the valley. The former plants came from seeds collected on the 1980 Sino-American Botanical Expedition by Ted Dudley of the USNA, Stephen Spongberg (Harvard), et alii. This was the initial introduction of this species.
Posted by ChrisU at 3:31 PM 0 comments

Aconitum japonicum and Rabdosia longitubaa....nice blue color in the fall 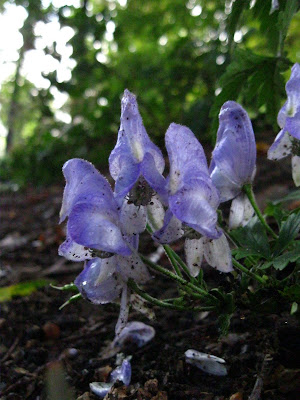 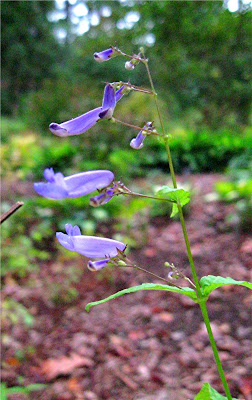 I can't decide if Monkshood or Wolfbane (Aconitum) is a better common name. Either one's better than Trumpet Spurflower (Rabdosia). They'reboth wonderful plants for the bright woodland garden. Aconitum needs soil that doesn't dry out completely, Rabdosia is a bit more tolerant but still resents drought and heat combined.
Posted by ChrisU at 4:55 PM 1 comments 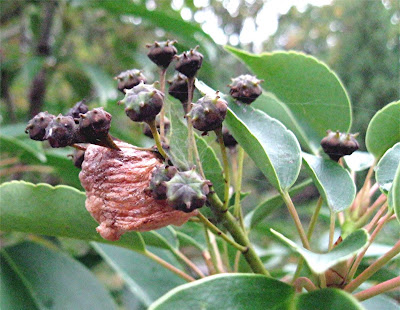 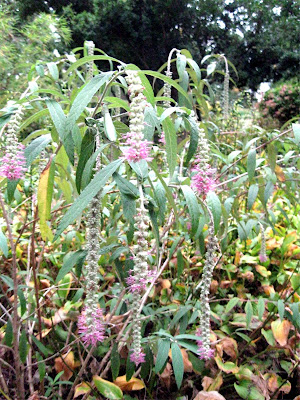 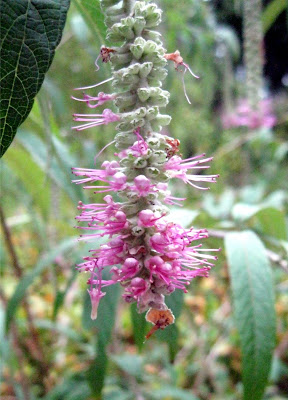 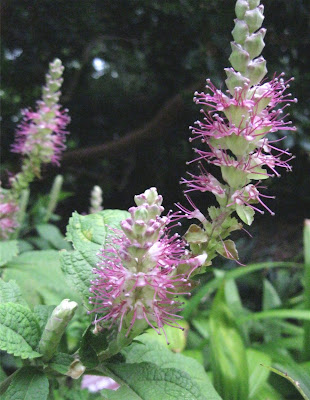 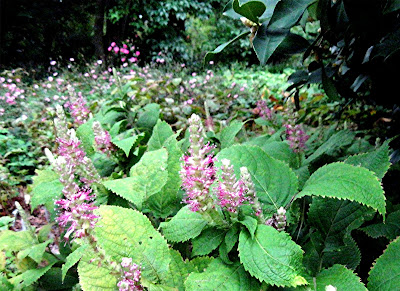 These two plants grow live about 100 feet apart in the Asian Collections and it's just odd how similar they are....in an upside down sort of way. Both are in the mint family and both are east Asian natives. Rostrinucula is a woody plant, a multi-stemmed shrub that give the superficial impression of being Buddleia davidii (Logonaceae). Leucosceptrum is a perennial that develops strong stems...almost woody, not quite. Both tend to attract butterflies but this hasn't been a great year for butterflies and they seem to have grown even scarcer the past few weeks.
Posted by ChrisU at 3:37 PM 2 comments 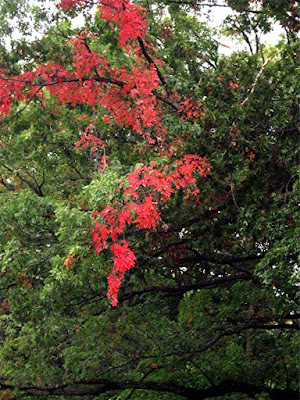 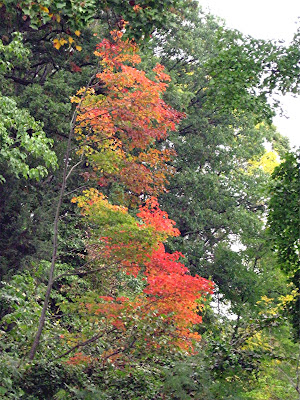 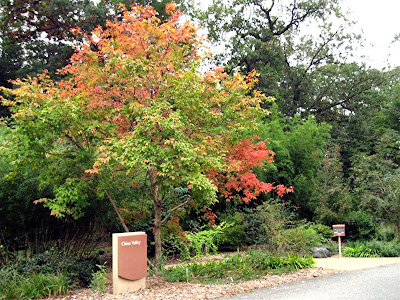 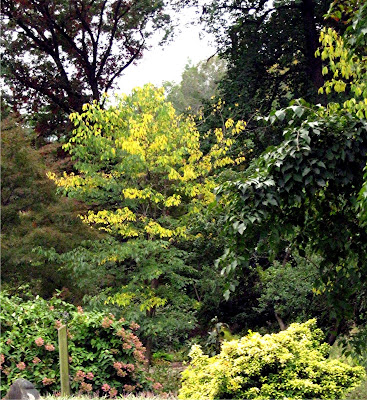 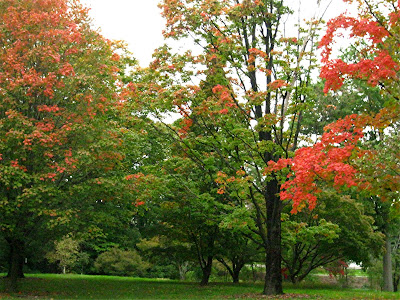 But hey! We had an earthquake, hurricane, tornado, records heat, record cold and alternating periods of drought and deluge. Why wouldn't fall be a bit out of whack? Liriodendron and Nyssa which might, in any normal year, be well into their autumnal display are hanging in with healthy green leaves.
Posted by ChrisU at 4:22 PM 1 comments

Small but fierce (Robin Williams in Death to Smoochy) 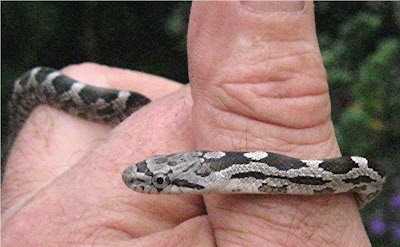 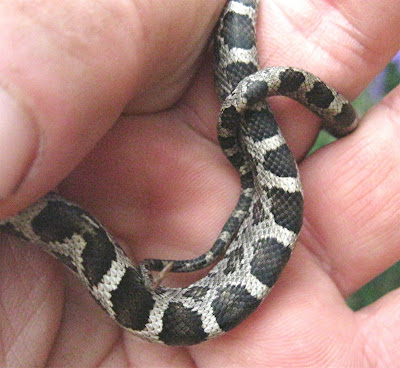 Max and Peter spotted this small snake in the garden this afternoon. I'm darned if I know what it is. If it weren't so skinny, I'd call it a hog-nose... that must be what it is. They favor sandy areas and our garden is all sand and gravel. I just hope it grows up and eats many voles.

I bought a bunch of different sedums today for mixed planting in the new steps. I bought individual pots, divided them where I could, and used the broken pieces. I dug up a few from the front bed by the street and moved a Viola pedata and a small creeping cinquefoil. I'll move a few pieces of black mondo grass and maybe some pink pussytoes. I'm going for a xeric mixed carpet look. Have to add some iceplants too.

I was intrigued to find a number of fresh 1" holes in the soil between the stone risers. Chipmunks, I hope. The dog spent much of the day sniffing them, without trying to dig out the mystery inhabitants. Maybe they're not a mystery to her. If there's voles in those holes, she's welcome to dig them out, though I think voles don't dig their own tunnels. I've heard they adopt old mole digs.
Posted by ChrisU at 5:13 PM 1 comments