Pictures of Aconitum jaluense var. triphyllum, or as we know it, Aconitum triphyllum 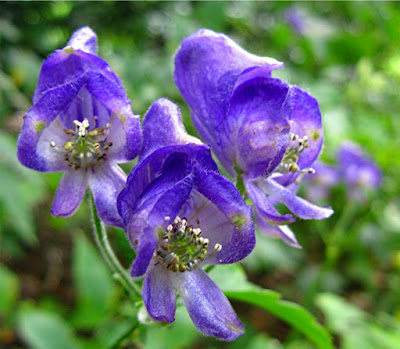 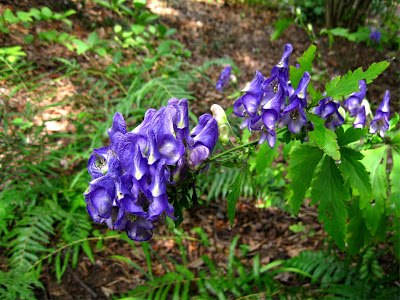 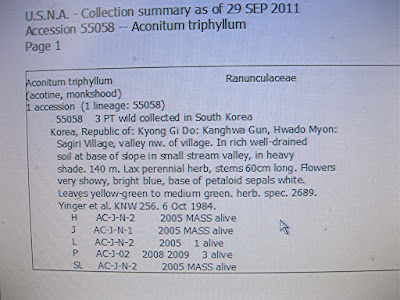 Beautiful by any name this is flowering in several place in the Japanese Woodland. From the bottom picture you see that Barry Yinger collected it in South Korea in 1984 and we're maintaining it. Amateur Bot-ann-ist posted a wonderful picture of Aconitum this past week. Her photos are always impeccably composed and perfectly executed. I seem to get some pleasure

from combining admiration and jealousy every time I view her posts.
Posted by ChrisU at 3:45 PM 0 comments 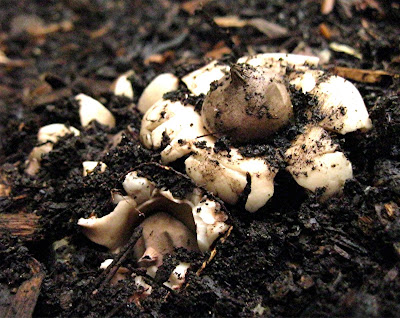 The Boletus type mushrooms were on the slope of Korean Hill, the Earth Stars, in the Stroll Garden of the Bonsai Museum. George did tell us that in Gotelli they frequently see the Earth Stars.
Posted by ChrisU at 3:42 PM 1 comments

We did some planting today with the volunteers. Pinus koraiensis from the Morris Arboretum came in some odd pots 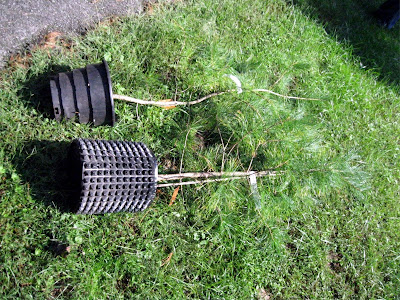 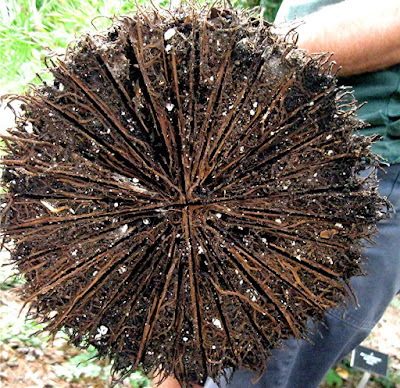 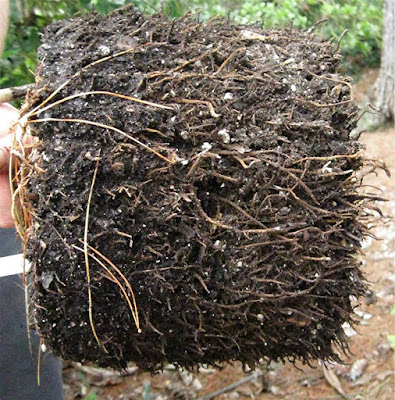 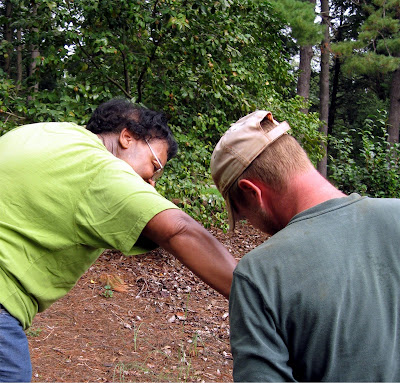 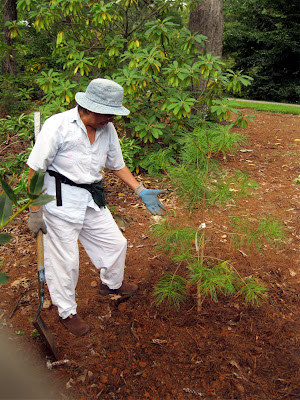 Are they ribbed and knobbled for her pleasure? No, that's to prevent roots from circling the pot, being transplanted, and eventually killing the trees. Both pots seemed to work well: note all the new root tips at the margin of the rootball in the middle picture.
Posted by ChrisU at 3:37 PM 0 comments

Tricyrtus hirta 'Miyazaki', named for the Japanese Experimental Station that selected it 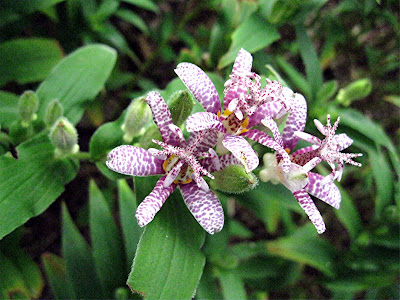 This is part of a huge planting at the intersection of Hickey Hill Road and the path to the Pagoda. It's a big healthy drift and if it were in range of irrigation, or if I were a bit more attentive to it's water needs in the summer, it'd be even nicer than it is. And that's going a ways. Tricyrtis is a wonderful plant to drift into shady areas where there is adequate moisture all through the growing season. Late flowers are the highlight, but the uniformity of height and texture can help to pull some order into a shady area.
Posted by ChrisU at 4:34 PM 1 comments 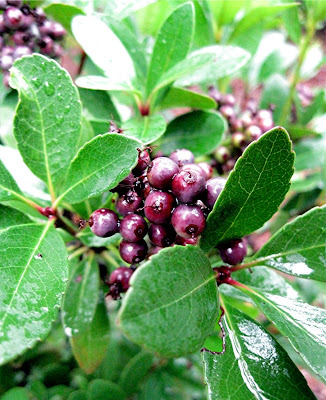 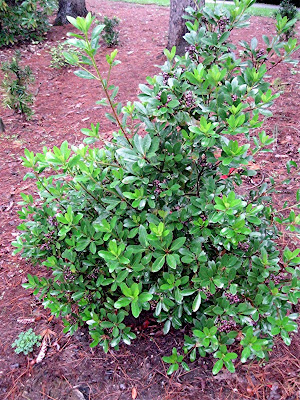 Hemiboea subcapitata. Doing nicely after surviving one winter at the US National Arboretum. 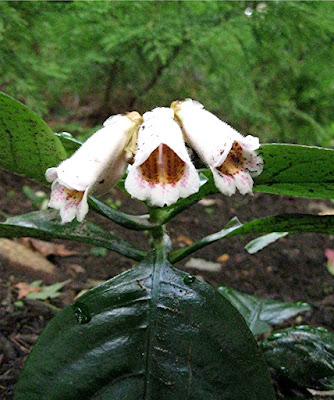 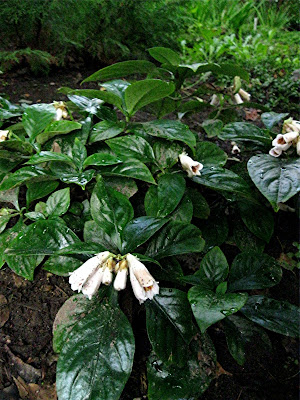 All survived and they look great. There are many more flowers this year. It really is a pretty little groundcover with those dark glossy leaves. I guess the final verdict isn't in but last winter was legitimately cold so I'm tentatively confident it's a USDA Zone 7 plant. This patch is just past the stone steps that descent from the red pagoda into China Valley.
Posted by ChrisU at 5:12 PM 3 comments 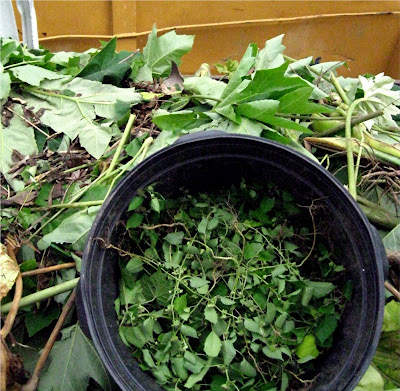 The Mulberry weed is loaded with seed. I must have pulled a couple thousand of them today, the majority coming up through a bed of Rubus calycinoides (pentalobus). I learned that while I can pull weeds simultaneously, my left hand doesn't have the sensitive "touch" my right does and so I snap the tops off of the roots more often southpaw. Mulberry weed has a fairly stiff stem so it isn't difficult to go back and find the stub. I suppose that's a skill in itself. I can no longer remember whether Lawrence Lee (an Asian Collections Curator 20-odd years ago who was therefore my boss for a while) actually made me dump my weeds onto a tarp and produce roots to match all broken tops, or whether it's just a story I made up. Wonderfully illustrative of our relationship whether true or false. To this day I unfailingly track down roots when I break off a top. Thanks Larry. Next spring I'll be certain to apply an appropriate pre-emergent herbicide. We'll see how it goes.

The Tetrapanax is another story; I love this plant but it suckers, well, frighteningly here. From Maybe five shoots three years ago we have closer to two hundred than one hundred. Many are over 6', 2M. The large stems and the undersides of the leaves shed fibrous particles that can gag anyone working with it. I finally got a dust mask for my third load. What can I say? I'm an idiot. Amanda tried several herbicides on this plant, without success. I pulled out about a hundred plants, cut off fifty or so larger ones, and left many small ones. I will do research and cook up some concoction of death to paint on the small plant and the stumps. Then I'll follow up rigorously and eventually we will vanquish it. Someplace we need to install some bamboo barrier and replant.

The Rice-paper plant will compost nicely, but I put the Mulberry weed into the dumpster. If our compost somehow doesn't kill the seeds we don't want them turning up in our mulch some day.
Posted by ChrisU at 4:41 PM 0 comments 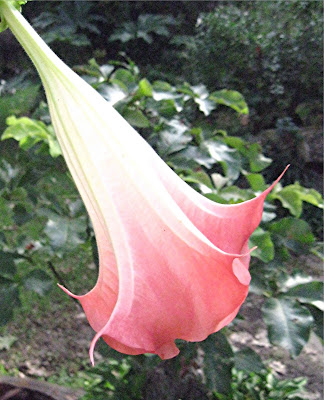 The sun came out for a few hours this afternoon, and so I went out and took a few pictures. It hasn't been out much for the last week or so. It shows its head for half an hour or so when the humidity dips below 90%, cooks recent rainfall into the atmosphere, then retreats. The tropicals, including the brugmansia (pictured above) , seem to love it. As loathe as I am to look a gift horse in the mouth, I could use a little classic fall weather: blue skies, dry air, bracing temperatures, maybe the exhilaration of a little ozone.... I know I'm whining.

I'm home today while Karen, Max, and Peter are doing a gardening job in University Park, an interesting community that almost adjoins the University of Maryland. It's mostly an upper middle class enclave with more than a handful of expensive properties. Nothing out of the ordinary, except for the reason the clients called Karen. Hedera helix, English Ivy, is dying in University Park. I went along, just as a companion, on the initial visit and had trouble believing what I was hearing and seeing. Apparently mass plantings of English Ivy have died over a three year period. They didn't just bleach, they didn't just accumulate severe leaf spots....they actually died. They're gone. Wow. What can it mean?

I tried to act sympathetic but I've spent enough of my life trying to kill H. helix that it was hard to not dance a jig at the thought that something was killing it off. After elation, my secondary reaction was skepticism. I asked questions; tried to elicit details without revealing my true thoughts. I nodded sympathetically at the though that ivy which that had covered 50+ feet of chain -ink fence for ten+ years had just disappeared without a trace. Even I had to admit that the ivy must have been more attractive than the fence was. Rusting and all. From further conversation, I learned that other properties had been affected. And that apparently the Extension Service had been consulted and had offered some sort of explanation. Nothing Googleable though. Monday I'll consult with those of my co-workers who are more attuned to the pest and disease side of horticulture. I'm crossing my fingers but I really think there's something here.
Posted by ChrisU at 2:41 PM 4 comments