We had a grafting workshop Friday at the Arboretum....we're not angry, we're just concentrating 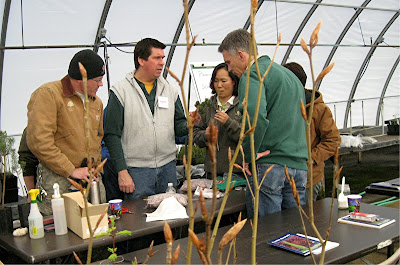 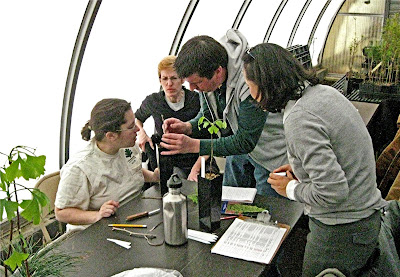 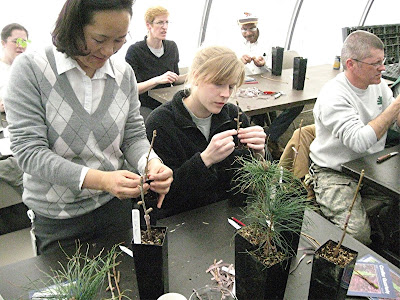 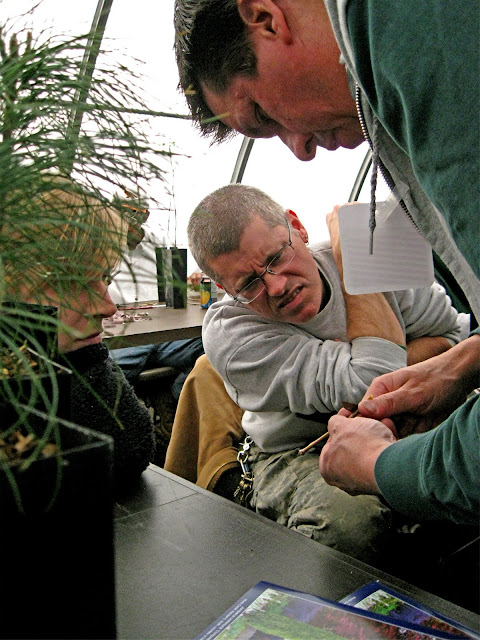 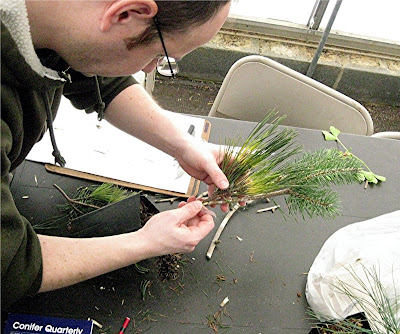 I used to think I was an A-List plant geek, not by virtue of my knowledge, but because of my fanaticism. Well, guess what? It turns out I'm B at best! When I was in Fern Valley I got an inkling of this. There are rhododendron adepts, Don Hyatt for example, who know the plants of interesting populations (Gregory's Bale, Hooper Bald, et alia) as individuals. There are a lot of these people. And they've propagated all those plants, and kept records. You can walk through their gardens or nurseries, notice a beautiful plant, and they can show you pictures and tell you stories about the parent. Apparently many of the plants are named and regular pilgrimages provide continuous histories of their flowering, growth, winter damage, or occasionally theft. I can only marvel.It's surreal to listen to them talk amongst themselves.

It turns out that the American Conifer Society is riddled with individuals who have that same working familiarity with hundreds (thousands?) of witch's brooms around the world, and who has propagated them, and how, on what, where, and their histories. Wow. We had the privilege of having one of those experts instruct us in the fundamentals of grafting. Bill Barger holds many positions in the ACS including webmaster, Regional President (of the Central Region), and I believe he's slated to become national vice-president. He can  surely graft...and teach grafting. I was awkwardly clumsy with my first attempt, somewhat better with my second, and after a few hours felt fairly comforable. I sensed that most of us were on a similar learning curve.

We had a couple hours of theory to start with including not only different techniques, but also who goes on whom, and when, and how to prepare. I took 5 pages of notes, and came away feeling, as I often do after being introduced to a new subject by a true expert, that I have acquired knowledge unfairly, or at least too easily. It's feels like stealing. This information isn't in the public domain, it's one man's accumulated experience. He offered it to freely...still... Bill has done a lot of grafting and he admitted that it's his favorite activity.  If the outline of his instruction was invaluable, and it was, his parenthetical asides were priceless. I'll happily sit through a two day conference to come away with even one or two new concepts. Friday I got 5 pages in a few hours.

None of us had ever grafted much, most of us not at all. After one day, I think we're functional novices and no doubt some of us will continue training. Apparently we did have a prodigy, Carol, a Conifer Collection volunteer, the only volunteer at the session. Chris Carley was already talking about followup training including a late summer session that would coincide with the best period for grafting Japanese Maples.

The art appeals to me more than the product. I like that precision is required, and knowledge of both techniques and plants. I sort plant people, not judgmentally I hope, into those who really seem to relate to and understand plants, and those who like them and have a good idea of their needs. Bill is clearly the former. I'm looking forward to seeing how my attempts fare.
Posted by ChrisU at 8:19 AM 2 comments

Platanus x acerifolia 'Liberty' this is an Arboretum introduction, the successful product of a designed cross 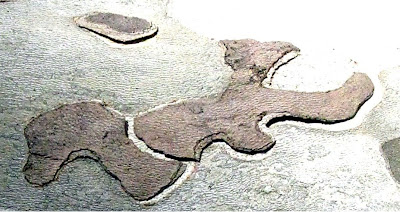 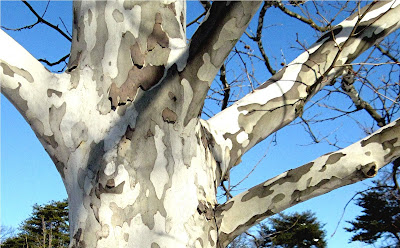 I've never understood how this can be a London Planetree. Neither of its parents (Platanus orientalis and P. occidentalis) are native to England. The first recorded instance of the cross  occurring was in Spain??? I guess it's just imperial prerogative. Anyway, this is a selection of a cross made in the early 1970's by USNA scientist Dr. Frank Santamour. I remember Dr. Santamour. His venture, looking back we can judge it successful, was an attempt to prodce a plant with some of the resistance to anthracnose (and the other maladies that inevitably afflict the foliage of our native Sycamore) found in the Oriental Planetree. He released two selections, 'Liberty' and 'Columbia'. Thirty odd years later this is still in the trade. You can drive right up to this specimen, like I did. It's just a few feet off the front (north) side of the parking lot in the National Grove of State Trees.
Posted by ChrisU at 3:29 PM 0 comments

If you were looking east just before 7:00 this morning you saw this curious sunrise 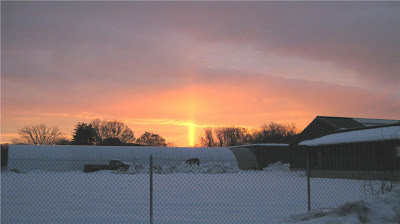 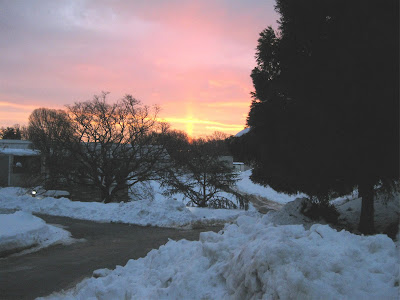 I think it's a "sun dog" though I had thought they usually came in threes, with the other two bracketing the column rising from the sun itself. If it was a sundog, its created by ice crystals dispersed low in the atmosphere. Anyway, sun dog or not it was beautiful.
Posted by ChrisU at 2:04 PM 1 comments 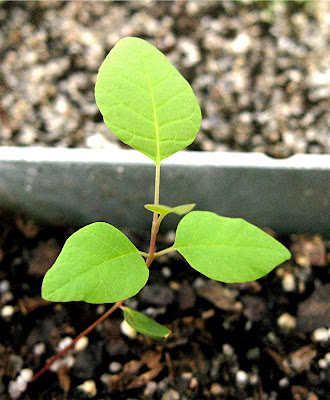 If you've ever listened to me rhapsodize about this, our native Smoke Tree, or read anything I'be written about it you've probably already stopped reading or you're dreading the embarrassment to come. Relax, I'm just going talk about the seed. (For rhapsodizing...)
We collected these seeds with Don Shadow, nurseryman extraordinaire, and owner of the largest private Zoo I've ever seen or heard of. Don is one of the top plantsmen in the country so we were grateful to him for directing us to the Cotinus, one of our target species on the Tennessee/Alabama trip. The plants didn't have a lot of seeds but after extensive searching we turned up a small amount. Joan acid scarified the seeds, and according to the label, planted them September 22 last year. The seedlings aren't on my normal flight path so I hadn't noticed them. Joan mentioned them this week so I had to take a look. There are about a dozen so far and this, the largest, is already identifiable as a Cotinus. The leaf shape and the margins are fairly definitive and the leaves are already beginning to assume the characteristic luminosity I like so much.
Posted by ChrisU at 2:00 PM 1 comments

Empetrum sibiricum: (Siberian Crowberry?) Kevin Tunison collected seed in Siberia and the plants have been growing in a sandy seed flat ever since 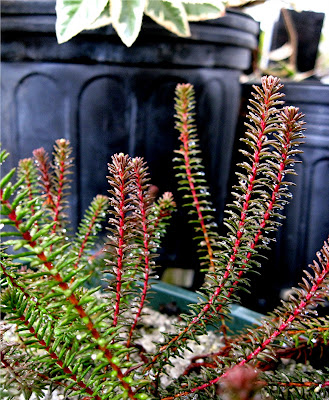 I wasn't there for the germination, but Stefan says the seed germinated readily. There are a handful of species but the only other Empetrum I know is Empetrum nigrum; Joan has several nice plants in the Northern Bog alongside the Fern Valley main trail. They are very similar in appearance the two species. Nigrum grows in peat bogs, usually farther much farther north than our latitude. Actually, the genus is mostly northern circumboreal with the exception of a montane species native to Chile. According to some accounts, Empetrum nigrum is circumboreal and has two subspecies; ssp.hermaphroditum with unisexual flowers and ssp. nigrum with bisexual flowers. Our plants are budded so we'll just have to look at those flowers when they open. Then we can compare our plant with descriptions of Empetrum sibiricum, if I can find a description. So far I've only got a name.

I guess my point is that the genus is cold adapted so that I worry about putting ours in the ground. I think I'll try one in one of the troughs on the terrace in the Court of Honor. They are nice little sprawling evergreen sub-shrubs and will fit in nicely if they can handle the heat.
Posted by ChrisU at 2:51 PM 0 comments 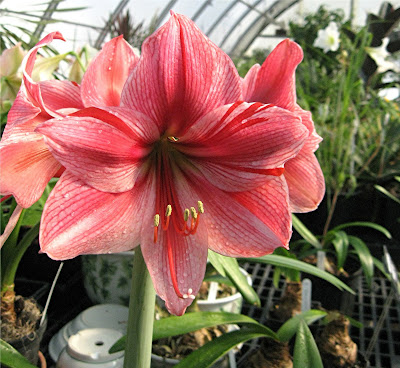 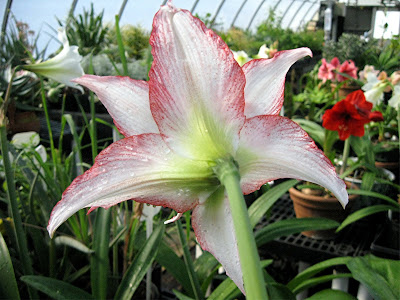 The Amaryllis just keep on flowering in Polyhouse 7.
Posted by ChrisU at 2:30 PM 0 comments 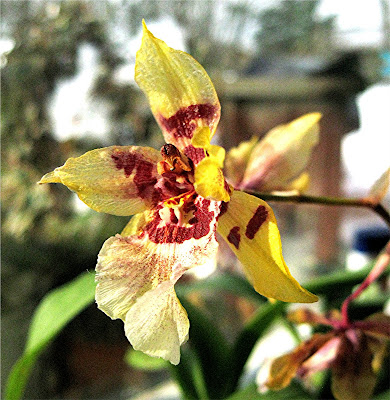 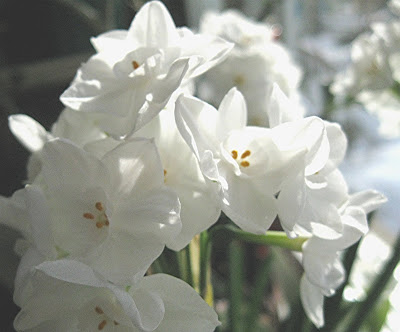 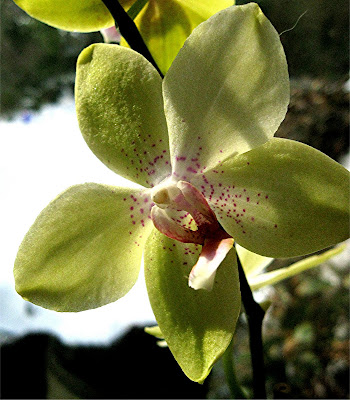 I have decided to take Elizabeth's advice. I'll enjoy the flowers in the window and try not to look at the snow in the background.
Posted by ChrisU at 6:58 AM 0 comments

I didn't use a torn photograph, that's a pile of snow right foreground 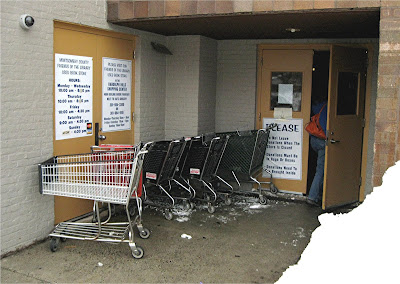 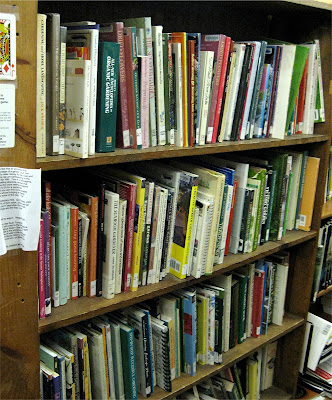 If plants are my favorite things and they are, books come in second. Cabin fever set in Saturday, and a trip to the Montgomery County Friends of the Library Bookstore at the Wheaton Branch seemed like a good plan. I love this store. Many Library's Friend's Groups have opened small to medium-sized used bookstores as a way of both raising money and helping to expeditiously deal with the overstocked  volumes in their branch. Donations pad the inventory, prices are low, and its a good way to recycle books, magazines, records.... This is a megastore, The store at Beltsville Library is about 600 square feet and I'm going to guess this one is at least 10 time that size.

There was a time when I wanted to operate a used bookstore. I accumulated boxes and boxes (>100 Boxes) of "inventory" and researched retail spaces. I planned and dreamed but then these Library stores began to appear and then Amazon consolidated 1,000s of small retailers and the venture, in my mind, didn't seem like it could succeed. But this store is great. I always check their "Mystery" and "Poetry" sections. This trip I found a large volume of the collected poems of Howard Nemerov. I'd only previously read him in anthologies and was excited to find this book for 2 dollars. He's very readable. I've always had this odd perception that he sits poised somehow between Dylan Thomas and Bob Dylan. Anyway, the woman who checked us out had an interesting story about him. She had gone to a reading he'd given, I think she sad at AU, and he had been annoyed that she asked him to sign a book she had received as a gift because the giver had inscribed the front endpaper. Nemerov gruffly opined that that was "his page." You don't always get a good story but you can always find good book for just a few dollars.

I took a quick snap of the Gardening Section. It was a little thin Saturday; I expect I wasn't the only gardener seeking vicarious relief. I have, in the past found some wonderful books in this section; I don't remember ever paying over 4 dollars. Sometimes I see a book that I already own but for a dollar or two, I can't help but buy it. I bring them to work and give them away.
Posted by ChrisU at 6:21 AM 0 comments