Carole Bordelon is not as tall as I am, but still...this Arisaema has some serious height! 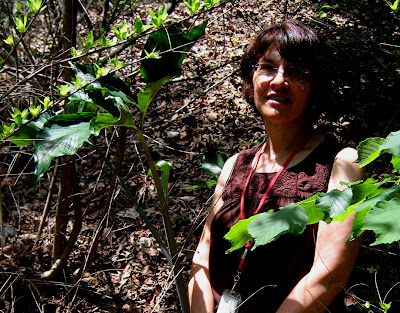 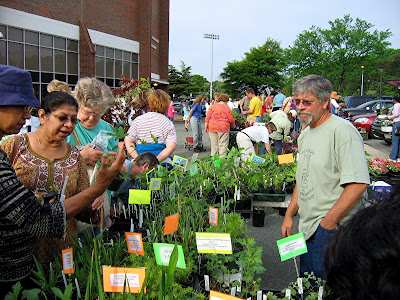 Pretty much all the Garden Clubs had sales today or at least it seemed that way! They're a great way to get both workaday garden plants and the odd unusual item. Prices are usually good and there is some expectation that the plant will be hardy if someone local dug it out of their garden! I bought a Crinum, powellii, which ought to be hardy anyway but hey, there were half a dozen pots so I know the plant has survived here at least a few years! I've actually grown Amarcrinum powellii for quite a few years and I guess the Crinum is the hardier of the two parents of that bigeneric cross.

Other plants I bought: Asphodelus damascena; Jasminum parkeri (that I have somehow lost over the years); Chirita 'Kazu' (a curious Asian Gesneriad whose hardiness I am not quite understanding)' Aster 'Jindae'; Sarcostemma sp., a tropical scandent member of the Asclepidaceae, one of my favorite families!; and Agastache rugosa who seems no longer to be residing in the Adelphi garden and needed to be replaced.
Posted by ChrisU at 5:46 AM 0 comments 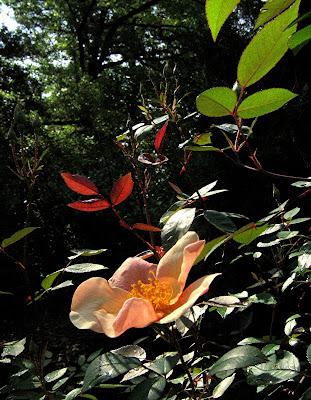 Hey, this is the rose that I (with my horrible vision) can identify from 1/4 mile away at 65 mph. Still, if you just look at one flower the shading of colors....
Posted by ChrisU at 2:02 PM 0 comments

I've been practicing; now I can focus the sun's rays wherever I want 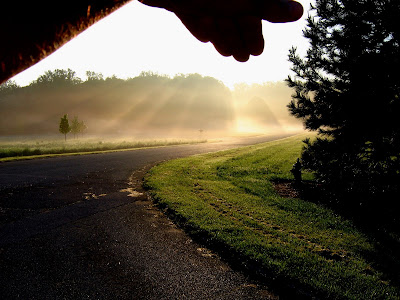 I was trying to blast that patch of Clematis ternifolia on the edge of the meadow.

Actually it's that regular problem of shooting into the sun. I have to shield the lens from the direct rays and my arms aren't long enough to get out of the picture and still leave an attractive view in the viewfinder.
Posted by ChrisU at 2:00 PM 0 comments 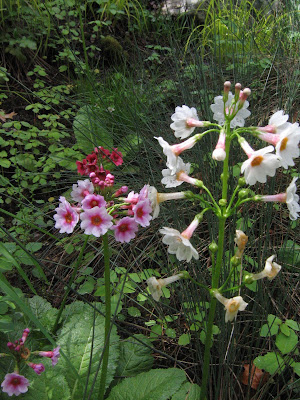 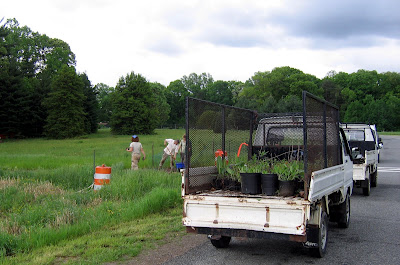 (note the ominoua sky) Fern Valley is partially open and more of it will open the end of this week. It's great to see planting going on; still....while it's wonderful to be in the Asian Collections, it's also difficult not to be part of Fern Valley. I suppose sometimes its good just to be an observer....?
Posted by ChrisU at 3:44 PM 0 comments

These ducklings have imprinted Sue Greeley, in the absence of their birth mother and follow her relentlessly 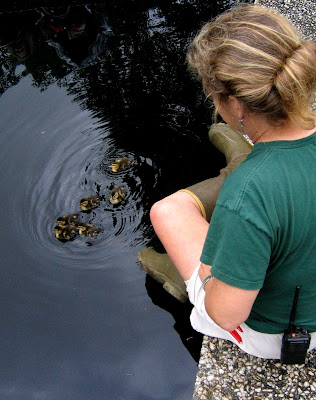 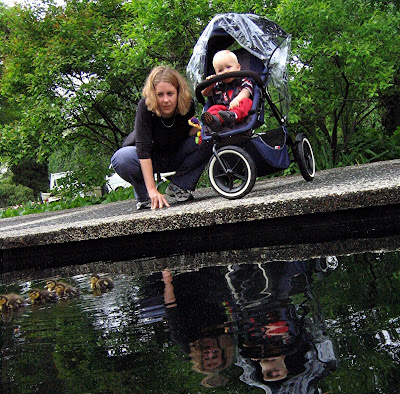 The ducklings themselves have attracted the attention of Arboretum regular Jasper and his mother.

When my children, boys, were 4 and 5 (in 1992), I brought them to the Arboretum to show them a duck's nest on a mulch pile at the top of China Valley. When we got to the nest the mother duck was very unhappy as a black snake (~5') was coiled around the nest and had already swallowed 2 eggs. The eggs hadn't broken and we squeezed them backwards out of the snakes mouth. We decided to move the snake across the Arboretum. Of course it probably returned the same day but....

Anyway, I positioned the boys in the back seat of the clunky Isuzu Trooper and gave the head of the snake to Max and the tail to Peter. Their faces were as readable as faces can be; they clearly had serious reservations, but they were young, I was the Dad, and they still trusted me. With some trepidation, they would give this a try. Karen's face was equally expressive; their mother was not happy. Clearly if anything went wrong I was in big trouble! All went well; the snake lay passively for the short trip to the Boxwood Collection and we released him/her in the Tree Peonies. Whether there is a causal relation or not, I don't know, but the boys never did had any issues with snakes.
Posted by ChrisU at 3:34 PM 0 comments 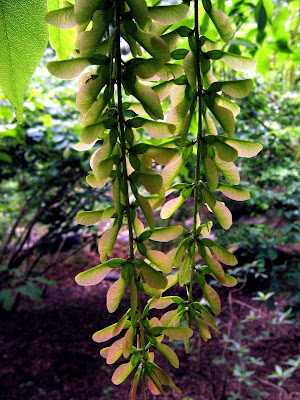 Maidenhair Fern looks good up close, the Ostrich Ferns looks good from 50' away 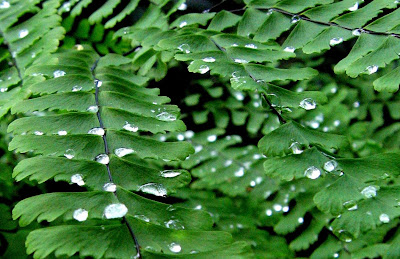 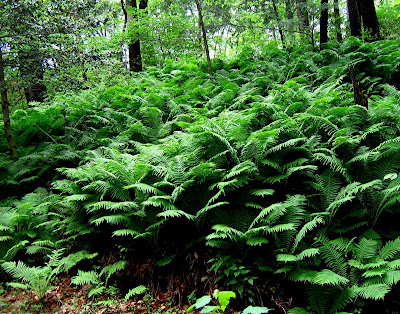 It's still raining, we have over an inch and a half this month and it's only the 6th. The eponymous Ferns of Fern Valley are very happy. At home I have had to move my seed flats under an umbrella because they have been soaking wet for over a week and it's supposed to rain tonight. I'm not complaining....yet. The sandy soil in Adelphi can dry out in less than a week once it stops raining, so more is better.
Posted by ChrisU at 5:18 PM 0 comments

Syring villosa, the Late Lilac...it's only barely begun to flower 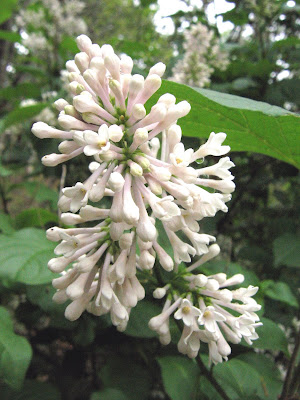 Syring oblata, the Early Lilac, was full out on April 13; three weeks later S. villosa is just beginning so the season runs a month or so. This plant is located along the path towards the bottom of China Valley. I was pruning nearby today. I am working my way down the valley, weeding, pruning, and doing whatnot. The problem I've run into is that there are weeds developing at the top and I haven't made it to the bottom yet...It's been a good spring for weeds!

But I digress....S. villosa, which blooms on new wood, is one of the parents of the Preston Hybrids, a series of cultivars that, by my observations, perform better in our area with its hot humid summers than the traditional S. vulgaris cultivars. Dirr observes that there are a frightening number of them. I know only a handful, but particularly like 'Donald Wyman' and 'Miss Canada'.
Posted by ChrisU at 4:54 PM 0 comments 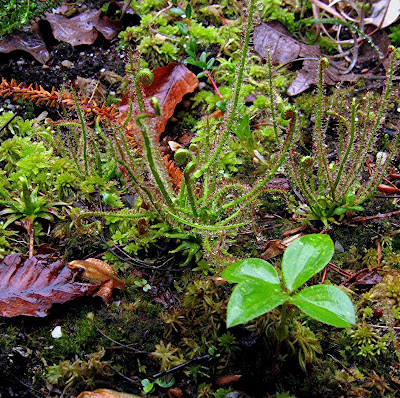 It seems like it's been raining for a week and it has off and on: good weather for bogs! The Fern Valley Bog seems particularly happy. Cornus canadensis, Bunchberry, is no special feat for those of you who garden in USDA Zone 6 or lower, but it is a considerable triumph here. This plant has been in the peat for two years and seems to be making it. The Threadleaf Sundew is almost a weed; it seeds throughout the small bog. There must be 200 or more of them. The Sphagnum is slowly closing in the open areas that Cranberry hasn't already co-opted. Actually, if you click on the picture and enlarge it, you can see a small strand of Cranberry and a little rosette of Aletris farinosa.
Posted by ChrisU at 1:59 PM 0 comments

I went on two design consultations this weekend to gardens that 99% of us would love to have the way they are! 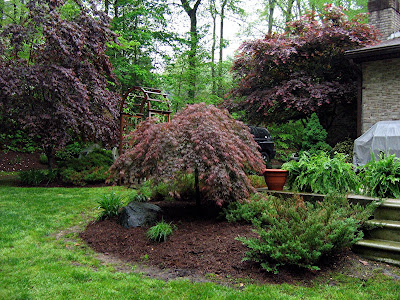 Well, maybe not since gardens are personal, but they were both certainly wonderful spaces! In both instances we're just addressing specific, relatively small portions of the gardens.

I bought some used books last weekend at the Arboretum: they had been owned by people I knew, liked, and respected: continuity is good! 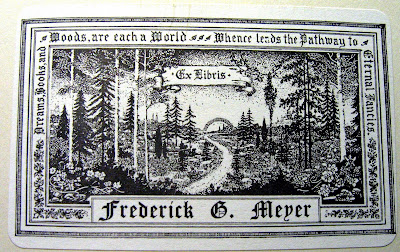 Florida Wild Flowers is a trade paperback with 500 color pictures of flowering plants found in Florida. It was a great buy for $4, and came from the library of Franziska Reed Huxley, who inscribed her name on the inside cover. Franziska was a fascinating woman, a great lover of plants and gardens, and a Huxley because she was married to Matthew Huxley, son of Aldous. She was a member of the FONA (Friends of the National Arboretum) board, and managed their annual plant sale. She left her library to FONA and they have been for sale these past two years.

Years ago, when I was doing garden design for Behnke's, I got a call from a woman in Chevy Chase who had bought a house and was overwhelmed by the garden she had inherited. I spent some considerable time, not designing, but identifying and mapping an incredible number and variety of plants, some common, some highly uncommon. It turns out that this had been Franziska's garden. Small world.

Frederick G. Meyer was a taxonomist and the Director of the Herbarium at the National Arboretum. In addition to being a superb taxonomist, he was a sort of Renaissance intellect. He left his library to the Arboretum, and while much of it was incorporated into the Arboretum Library, some volumes were duplicates and those were put into a sale of surplus books. I bought a few volumes that had belonged to Dr. Meyer. The bookplate is excellent; more on it later.
Posted by ChrisU at 1:43 PM 0 comments