It's a tropical kinda day 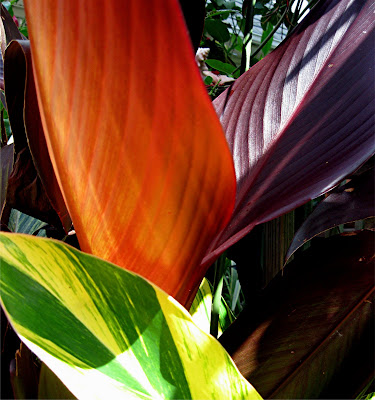 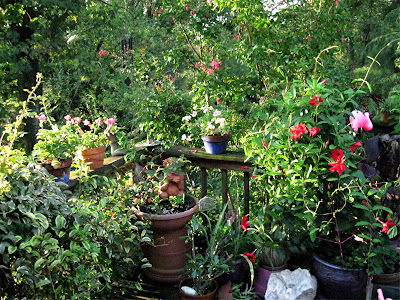 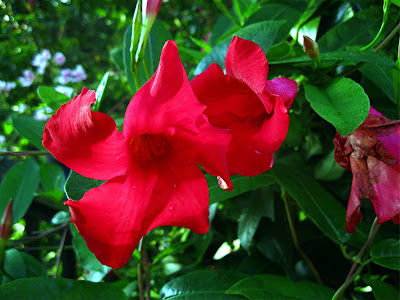 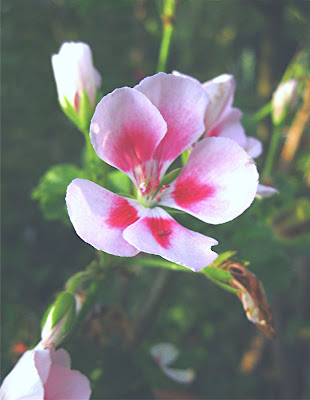 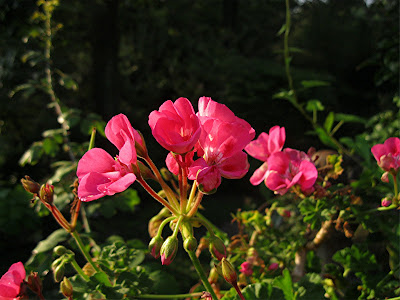 It's cooler this morning too a a bit less humid? The plants on the back deck are very happy; so am I. We are so fickle though. Five weeks ago most of us gardeners in DC would have traded....I don't even want to think about what....for a good rain. Yesterday, the last of seven consecutive rainy days, topping off basically e weeks of clouds and rain.....we were at each other's throats. Oh well. All's well that ends well.
Posted by ChrisU at 5:10 AM 0 comments

Zanthoxylum simulans with fruit and Z. piperitum without 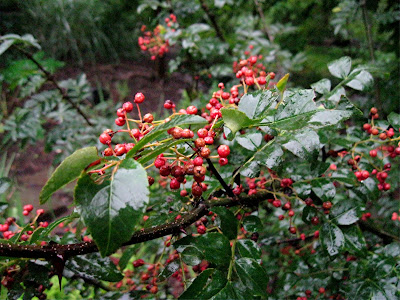 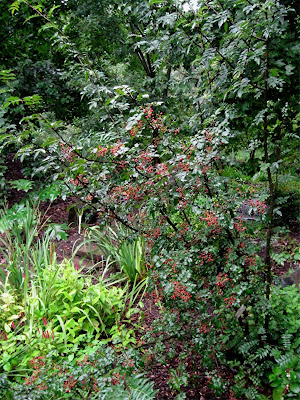 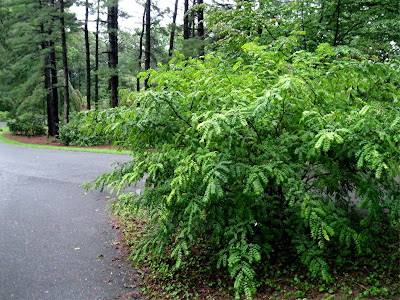 Sichuan pepper is one of the five spices in Chinese Five-spice powder (along with star-anise, cloves, cinnamon, and ground fennel seeds), and one of the major seasonings in Szechuan cuisine. Sichuan pepper is the dried husks of various species of Zanthoxylum, including simulans and piperitum. They're members of the Rutaceae and have that pharmaceutical smell that I associate with Rue and Euodia. It's a large genus with well over 200 members. We have, in addition to the two pictured species, Z. alatum, a plant more than adequately armed with ferocious thorns. The plants are supposedly dioecious and non-parthenocarpic. That would explain why the two large specimens of Z. piperitum don't set fruit, at least it would if we assume they're both males or both females. It doesn't explain why Z. simulans, a single plant, does set fruit. There are two possibilities: one, it has crossed with the Z. alatum about 100' away, or two, it actually can produce fruit parthenocarpically. Though the bulk of the literature seems to deny that possibility, I vaguely remember reading in a forum or letter somewhere that single females of this species do in fact produce fruit. I talked to Stefan and he tells me he's not certain that this species is correctly identified. We'll work on that. Since I ate a fruit yesterday I hope it's at least close enough not to be poisonous. I talked Joan, Carole, and Chris into sampling them as well, but I don't think any of them actually ate the seeds like I did. I read that they're toxic only in large quantities.

The flavor is singular and unforgettable; on initially touching the fruit I received a tingling sensation in my lips, biting into the seed (which is not necessary as all the flavor is in the pericarp) produced produced a heightened level of tingling, not unlike the feeling you get from touching your tongue to both terminals of a nine-volt battery. Later there is some numbing of the tip of the tongue and the lips. Wow. The flavor seemed to me acidic in the sense that it was citrusy. That makes sense for a plant in the rutaceae, but I read that the chemistry is actually basic. Both Carole and Chris remember eating dishes with Sichuan pepper as a seasoning so I looked for recepies and found another cool food site; I'm sure there are more food sites than plant sites, hey we all eat. Plus I spend more time among plants, still,whenever I spend much 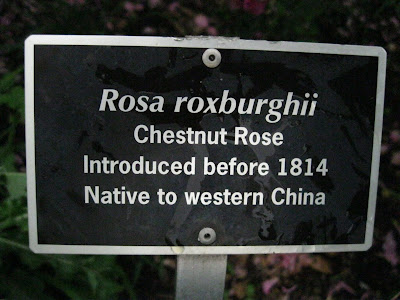 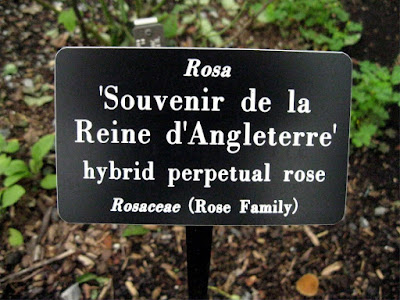 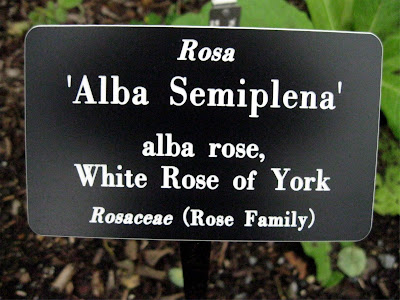 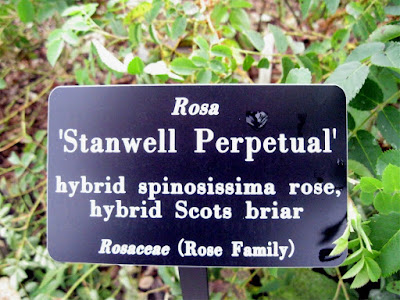 I'm not really a curator, but they let me go cause I'm old and can be counted on to stir up some sort of trouble. We label all of our plants here. Each plant has a "record label" with it's scientific name, date of acquisition? I think, source, and a number that identifies it as an individual (it's "accession number". For our visitors, many of our plants also have a "display label". We've been developing a new format for these labels and we have a new machine to engrave them. We're into the process to the point that 100? labels were written, formatted, created, attached to their new (black! stakes and put out on roses in the Herb Garden. They've been there a while to be observed, analyzed, and... I innocently, well, sort of innocently, asked how the process was going which started a lively discussion that ended with all of us trekking over to the roses and studying the labels.

There was no consensus of opinion. The bottom three labels are new, the top, is an old style. I see that we've omitted the year of introduction from the new labels. I like that information about cultivars and of course in this historical collection it's an important bit of information. I know we're trying to standardize though and for non-cultivars there is no year of introduction unless that plant is from another country and then there are dates of introduction to many countries. I don't know. Even just providing the common name isn't always simple. Some of these roses have important historical names in addition to the name we know them by now. The whole thing is complicated and I'm happy that all I have to do is offer my opinion and let the buck stop with someone else.
Posted by ChrisU at 3:55 PM 5 comments 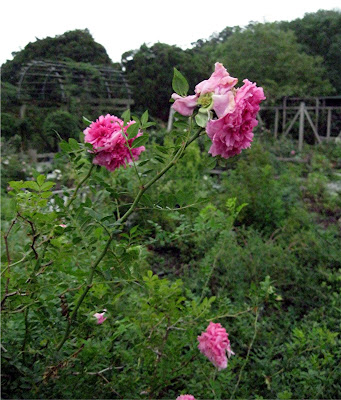 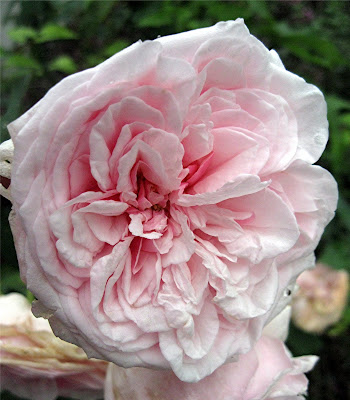 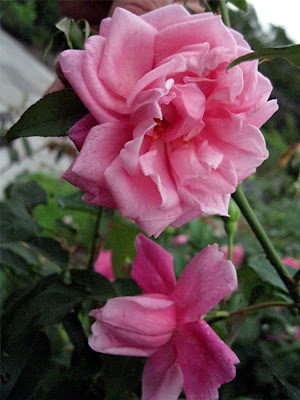 The roses themselves were in pretty good shape. Here at the Arboretum, when the days get shorter, the nights get cooler, and it begins to rain again, the roses get a second wind. 'Rebloomers rebloom with flowers larger and more colorful than mid-summer blooms.
Posted by ChrisU at 3:43 PM 0 comments

Both the imagery and the rhythm put me in mind of Hopkins' The Windhover. That's a good thing.

It rained today at the National Arboretum....a lot 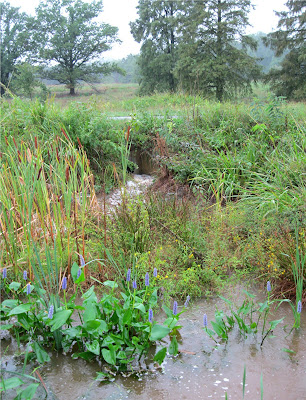 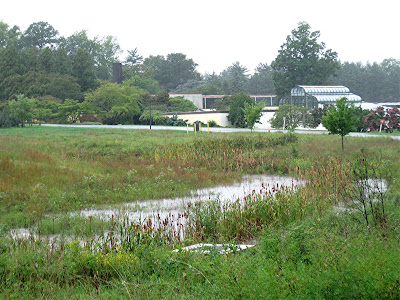 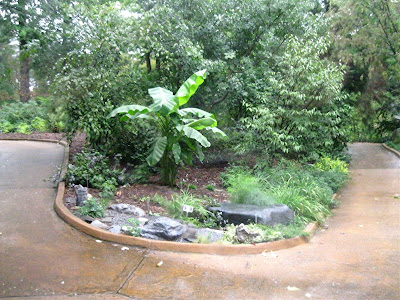 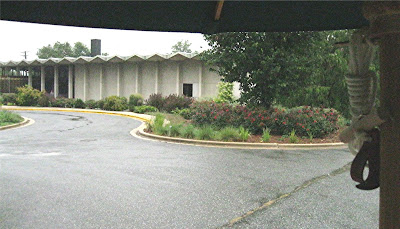 Runoff from the Ellipse filled a small corrugated culvert and flooded both the upper and lower sections of the Fern Valley wet meadow. Bullfrogs croaked their appreciation. On a larger scale it pooled in the infiltration basin and the storm water pond on the Ellipse proper. The cattails were happy. In the Asian Collections, the tropicals finally had enough water; this Musa 'Basjoo' has grown from 2 to 9 feet in three months. It fell in torrents on the Administration Building mid-renovation. Towards the end of the day the sun crept out tentatively but retreated quickly and the rains resumed.

My drive to work this morning was one of the oddest I can remember. I left just after 6:00 am half an hour before sunrise (~6:40 and later every day) so the hour combined with the clouds made it pitch dark. It wasn't rained when I left but within a mile I was enveloped in heavy rain. And then out of it by the gas station, about 5 miles. It began to fall again in earnest before I finished pumping but still before I'd gone the 2 miles to the highway it'd slacked off again. Three miles later as soon as I turned on the Parkway the rains resumed for about a mile at which point they stopped again and the sky lightened enough that, had it not been drizzling, I'd have turned off my headlights! Five miles later as I turned into the Arboretum the skies darkened and the deluge resumed. Things continued along those lines all day and as a bonus we had incredibly loud thunder. Movie thunder.Endless rumbles of reverberations and echos.

Lycoris radiata flowering under Acer pubipalmatum in the Asian Collections 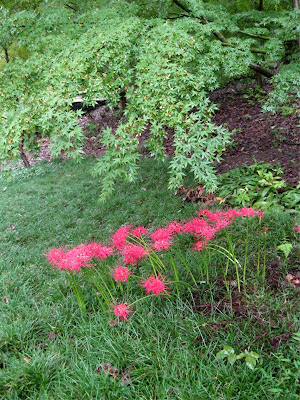 It poured last night and off and on today. For three weeks we've had all the rain we could want without flooding. Actually, it's going to bring the rainfall to the year up to average. It was tough dealing with the drought through July, but all's well that ends well. In the collection we have a lot of Lycoris squamigera, the commonest of the "naked ladies" (so called because they send up flowering shoot without any leaves). The pink form is purportedly a triploid hybrid of two species and flowers a few weeks before this species.

Lycoris are sometimes called "resurrection" or "surprise" lilies because it takes less than a week for the flowering shoot to emerge from the soil, elongate, and then flower; sometimes a lot less time. All the rain we've had has helped drive these flowering shoots out of the ground. I first noticed them last Thursday and now they're flowering. The downside to all Lycoris is the death of their foliage in the middle of the spring garden. The plants will produce clumps of strappy leaves later this fall that will last through the winter. Unfortunately they go dormant in the spring producing sodden masses of rotting foliage. Siting is important!
Posted by ChrisU at 2:30 PM 0 comments