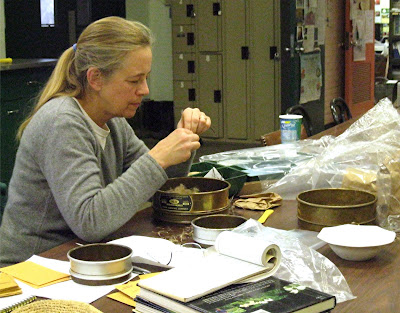 Climbing Dogbane: the first time I knew there was a native trachelospermum was when Joan cam back from a collecting trip this fall talking about it. She found it in Mississippi in the Delta National Forest. The vine is deciduous unlike it's Asian siblings and the fruits are quite distinctive.

I know Trachelospermum jasminoides, Confederate Jasmine; an evergreen groundcover, it's ubiquitous in planted landscapes in the SE. It will climb if there's something to climb on or just sprawl otherwise. Trachelospermum asiaticum is also evergreen, also a groundcover with fragrant flowers, it's not so widespread as jasminoides, there are a number of variegated cultivars of asiaticum. Both are Asian. I didn't find a lot of information about difforme; it's apparently a widespread but uncommon resident from Maryland south to Florida, west to Texas, and north through the Midwest approaching Michigan. I found multiple references to the flowers being strongly fragrant so I look forward to them. It may be a few years, but it's good to have things to look forward to.
Posted by ChrisU at 2:28 PM