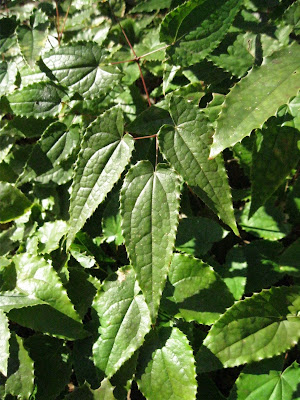 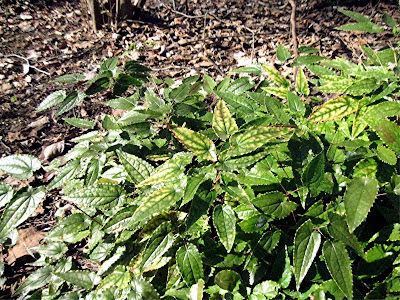 We'll come through sometime in February and cut this back along with all the other evergreen epimediums but for now it's an interesting textural element: punctuation in the winter garden. The spiny serrations are very cool. It'll be covered with a cloud of white flowers next spring, but I think I like the foliage best. It's possible, more or less, to divide epimediums into clumping and spreading; some spread vigorously by rhizomes and so serve well as groundcovers while others spread very slowly remaining in irregular clumps for years and years. The difference is a matter of degree; some clumpers seem to never spread and, on the other end of the spectrum, some of the spreaders rapidly and inexorably take over the bed they're planted in. Because the flowers are so complexly beautiful, almost orchid-like, I'm sure many a gardener has daintily placed one of the spreading plants in a mixed woodland planting only to find that as the years have passed it has overcome its less aggressive neighbors. I'm sure I'm not he only one!

The evergreen epimediums are great foliar accents in the winter. We have drifts of pachysandra, liriope, ophiopogon, rohdea, et alia in the collection that, along with the evergreen shrubs, provide the form for the winter garden but it's fun to have accents. Epimedium lishihchenii is another large-leafed Chinese species (leaflets to 5" long) that's fun in the winter with its leaf undersurfaces a pale violet.
Posted by ChrisU at 3:32 PM