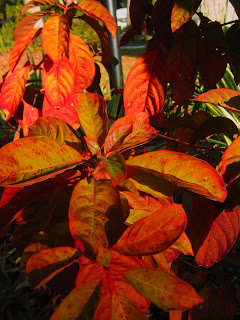 It's always exciting coming back to the Florida garden; this time it's only been two months instead of the usual four. Still things have changed. Typically we have a dry period from December to June, with fairly regular precipitation the rest of the year. Applying six dry months a year to soil that is almost pure sand produces a definitely xeric environment. The dry period started early this year; there hasn't been consistent rain since August. Some plants don't seem to care for whatever reasons. There is a heavy dew every night and some are able to utilize this moisture.

Firebush, Hamelia patens, is a staple of Zone 9 landscaping. Native on the southernn coastal plain, it's deciduous just a bit farther north, Much of the summer itis adorned with tubular scarlet flowers that dependably attract hummingbirds. Drought doesn't faze it, it grows fairly quickly and it doesn't get too big. Great plant!
Posted by ChrisU at 3:44 AM