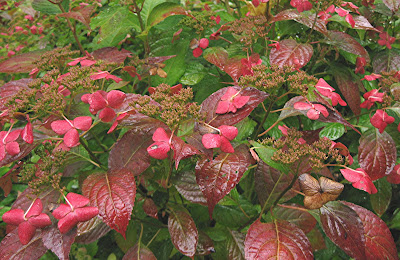 Pink and white bicolor flowers make this a very popular Hydrangea, but it's almost better, at least just as good now. Betty pointed this one out to me last week and it's only improved since them. While many plants have something to offer in two, three, or even four seasons, there's usually one spectacular show and the others are more nice, pretty good, or okay. This plant really jumps out at you summer through fall. To see these plants in the Asian Collections, walk down the stairs across the street from the big weeping Katsura. A little more than 100 feet? 'Bene-gaku' will be on your right. (Just a little bit farther on the same side of the path, is a Japanese Persimmon whose fruit is coloring up nicely.

Of course the main difference between the subspecies Hydrangea macrophylla ssp. serrata and the species is that while the serratas typically have a flat, or "lacecap" inflorescence, those of the macrophyllas are usually rounded, or of the "mophead" type. As far as general form, serrata's branches are more slender and tend to arch gracefully while the species has stockier straighter stems. Serrata (the mountain hydrangea) is also a bit more cold hardy, and Mike Dirr observes, a bit more prone to mildew than the mopheads. That's rarely an issue with us here in Washington, DC, though we did have a bit of mildew on hydrangeas this year. I expect it's much more of a problem in Georgia
Posted by ChrisU at 1:53 PM