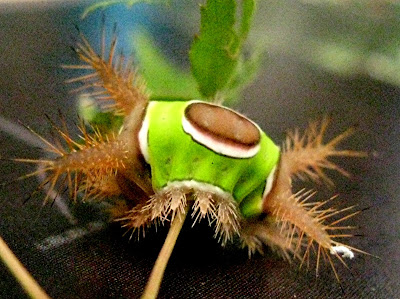 Hey, but she womaned up and brought it in so we could look at it! It's a striking caterpillar. And it hurts if you touch it. It's a not particularly common caterpillar, actually a "slug caterpillar" but a regularly encountered resident of most of eastern North America. The spines penetrate skin and produce sharp pain.

Brad noted that they seem to enjoy Cordylines and one year planting a lot of Cordylines had produced a large number of Saddlebacks. The literature suggests that they like palms which also have relatively thick and unappealing leaves, to eat that is. Like many a spectacular caterpillar, they metamorphose into a fairly nondescript moth.
Posted by ChrisU at 2:37 PM